The grinding poverty, begging mothers, and street children we encounter on our travels constantly remind us that we are incredibly lucky. While traveling through Peru we found a successful organization that educates street children and helps their mothers to become more prosperous. Bruce Foundation has opened 57 schools in 6 countries in South America, and continues to ambitiously expand its operations to help the most desperate children. Teams of social workers are sent into the poorest communities to look for children who are not in school. The children are either working to provide for their families or have been abandoned altogether. With community and parental cooperation, the children are educated in Bruce Foundation schools to bring them to the educational level of their peers so they can enter the government-sponsored schools. Bruce Foundation then pays for their registration, buys their uniforms and school supplies, and continues to support them to ensure they stay in school. Of the children who enter a Bruce Foundation school, 93% stay in the government-sponsored school for the first year. We contacted Bruce Foundation to see if we could volunteer by working in one of their schools and redesigning their website (their old website needed some work). They responded enthusiastically to our offer, so we met Bruce and his wife Ana Tere in the high-altitude capital of Bolivia. 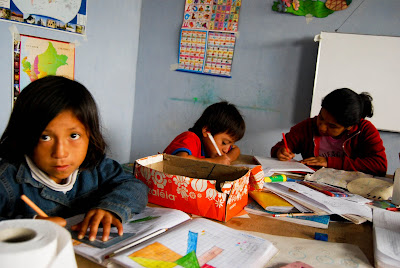 La Paz feels like many other Latin American cities we have visited, except there are women selling dried llama fetuses on the street outside our hotel. These fetuses are burned and mixed with cement for good luck when Bolivians are building a new house. Apparently if you’re really wealthy, you sacrifice a full grown llama. Not that we considered buying one, but we heard that any tourist offering even double or triple the price for one of the dried llamas will be denied. The indigenous saleswomen only sell to serious buyers. The streets of La Paz swarm with aggressive cabs and combis (small vans that serve as public transportation), shoe-shine children follow tourists down the sidewalks, and women selling wool sweaters and finger puppets sit next to their wares spinning thread. View from our hostel in La Paz, Bolivia

Socioeconomic status in La Paz reflects elevation – the lower the altitude, the more money you have. The wealthy enjoy the warmer climate in the bottom of the valley while the poor live in earth dwellings on the cold windswept plains high above the valley. This area above La Paz was incorporated in 1987 as a separate city named El Alto (The Heights). Currently El Alto has one million residents (as does La Paz), and is the fastest growing city Bolivia due to people moving from rural areas of Bolivia looking for work. The living conditions for most people living in El Alto are depressing:

Bruce Foundation has recently expanded into Bolivia, and its first school has been successfully operating in El Alto for several months. 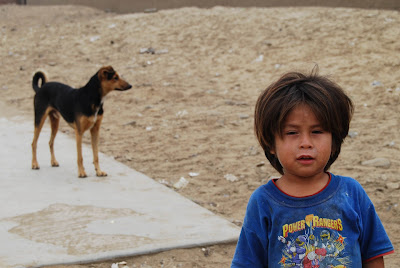 We visited the school with Bruce and Ana Tere twice over two days. The school was much further away that I thought – after a long winding accent out of the La Paz valley, you arrive one one of the few paved roads in El Alto. After turning off onto a dirt road it is a slow drive navigating around potholes and debris along the dirt road. When we arrived, we were excitedly greeted by the 20 children in the new school. Despite their harsh lives, they smiled and happily shouted out their names and crowded around us to sing songs and show off their multiplication skills. Unfortunately Chris and I were both battling a nasty stomach bug so couldn’t spend as much time as we wanted talking with the children. While I was sitting outside the school clutching my stomach in agony, a small group of 8-10 year old girls sat quietly around me. One patted my back while another offered me a chocolate bar that Bruce had recently given her. These are children who rarely get candy and have probably been hungry most of their lives. Here I was in one of the poorest neighborhoods of Bolivia, the poorest country of South America, and these children were comforting me and offering me their food. View from our hostel in La Paz, Bolivia

Between bouts of food poisoning and (possibly) giardia, we have made ourselves comfortable at the homey Hostal Estrella Andina in La Paz Bolivia. We have been working here for 2 weeks redesigning Bruce Foundation’s website and will be setting of to explore more of Bolivia in September. It is a truly deserving organization, so if you are inspired, please donate to support their work. Every bit helps.