Church dome in Cajamarca
We stopped for a night in the lovely colonial town of Cajamarca on our drive west to the Peruvian coast from our adventures in the highlands. Like much of Peru, this town has a rich pre-colonial history complete with Inca baths, aqueducts, and funerary structures. In the morning we spent an hour wandering the Ethnographic and Archaelogical Museum, an interestingly decrepit museum bursting with ancient pottery, jewelry, and fabrics. These priceless treasures were displayed somewhat haphazardly in dusty glass cases and on wooden bookshelves, with labels that looked like they were typed on a 50 year old typewriter. We felt like we were visiting a museum of a museum, since this is what we imagine Indiana Jones’ workshop might have looked like back in the 1940s. We then made a quick visit to the Ransom Room to pay our respects to Atahualpa, the last king of the Inca Empire. 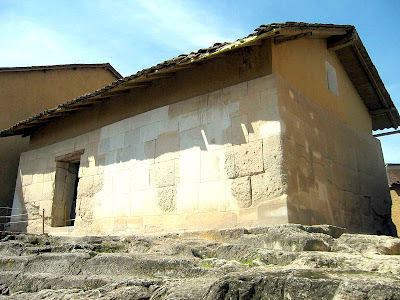 The Ransom Room (photo courtesy Wikimedia Commons)
Before the Spanish conquest of the Inca Empire, European explorers brought smallpox to the continent with disastrous consequences. The seated Inca king as well as his eldest heir both contracted smallpox and died in 1527, setting off an inheritance struggle. Two sons of the recently deceased king born to different mothers both claimed the to be the rightful heir. Huáscar was of royal blood, so was supported by the nobility as well as religious and political leaders. His half-brother Atahualpa was considered illegitimate, but was well liked, intelligent, and a cunning military thinker. Huáscar gathered his forces near Cusco, in southern Peru, while Atahualpa was supported in Tumebamba, a city in what is now northern Ecuador. Between 1531 and 1532 over 400,000 troops fought battles throughout the empire, with over 100,000 casualties, but Atahualpa reportedly won every battle. When Huáscar was taken prisoner in 1532, Atahualpa was declared victor of the civil war. Before he could return to Cusco to claim his throne, he encountered Spanish conquistador Francisco Pizarro in Cajamarca. While Atahualpa had around 7,000 supporters with him, they were armed with slings and rocks and protected by leather armor. Pizarro had only 180 men, but had 30 horses, 4 canons, iron swords, and guns, none of which the Incas had ever seen before. Feeling unthreatened by Pizarro’s small force of men, Atahualpa left much of his army outside the city and entered unprotected with a small group of lords to greet Pizarro. The Spanish launched a surprise attack, easily slaughtered this force and took Atahualpa prisoner. The battle of Cajamarca should more accurately be described as a massacre as with its superior weapons, the Spanish then proceeded to kill most of the 7,000-man strong Inca army. As ransom for his release, Atahualpa filled the 85 square meter ‘Ransom Room‘ once with gold and twice with silver. The Spanish took the riches and held a mock trail of Atahualpa. After finding him guilty of killing his brother Huáscar and revolting against the Spanish crown, they executed him. The fragmented Inca empire still took 40 years to conquer, but the Spanish eventually gained control over the vast area. Girls watching us drive through their village on dusty dirt roads

After visiting the Ransom Room and wistfully wondering about alternative outcomes, we headed west. Supposedly the road from Cajamarca to the coastal town of Trujillo was a modern, paved highway. We were looking forward to a change of pace after spending the previous three days jolting over gravel mountain passes and peering down precipitous cliffs as we changed flat tires. We asked locals for directions and headed out of town. On dirt roads we passed ancient Inca aqueducts among the spooky rock gardens that sprouted out of the tops of hills, and wondered when the road was going to change to pavement. We think we ended up taking a very ‘local’ shortcut, as it was three hours of gravel switchbacks through tiny villages before we found the highway. We still didn’t get any road relief though. Almost the entire highway, all 4 hours of it to the coast, had recently been ripped up and was in various stages of reconstruction. We arrived in Trujillo dusty and tired, only to find that none of the city’s hospitals had Chris’s rabies shot. So no rest for the weary, we spent the next day driving another eight hours to Lima, where they did have the appropriate rabies vaccine. We found a great hostel on the coastal cliffs of the city and are resting here for several days. And not driving anywhere.