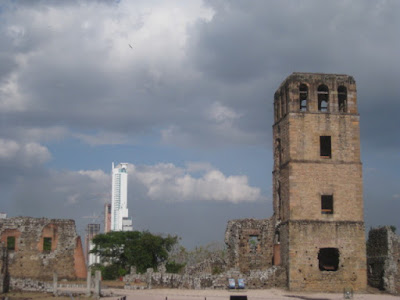 Modern skyscrapers rise behind the ruins of the original Panama City

Panama city was founded in 1519 on the site of a native-Panamanian fishing village shortly after Spanish explorer Vasco Nunez de Balboa made the reasonable claim that everything that touched the Pacific belonged to Spain. For the next 150 years it served as an important port for Spain and a launching point for the conquest of the Inca Empire in Peru. Known as the ‘bullion pipeline,’ much of the gold and other wealth plundered from the Incas passed through Panama city, also making it a prime target for a series of pirate attacks. The city finally fell in 1671 to privateer Henry Morgan and over 1000 of his men. After looting the city of all its wealth, it was burned to the ground. England rewarded this deed by knighting Morgan and appointing him lieutenant governor of Jamaica. Of the hundreds of houses, churches, a mint, and stables, only scattered stone foundations remain today. 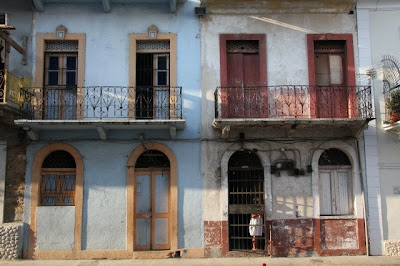 After its plunder, Panama City was reestablished on a small rocky peninsula north of the original site. This area is now referred to as Casco Viejo, meaning Old Compound. Protected by a shallow bay, moat, fortified stone walls, and watchtowers, the city was never again sacked by privateers. However, the overland trade routes to Panama City were subject to constant attack, so less than 100 years after it was reestablished, the city was in decline as the Spaniards stopped using the route. Panama city again revived with the construction of a railroad in the 1850s that was an important part of the route west for the gold rush. Rather than traveling by land across the United States and risk attack by American Indians, prospectors and miners from the East Coast of the US would sail to Panama, cross the narrow isthmus via rail, and then make their way north to California. The city continued to flourish as the French attempted to build a canal starting in 1880. This attempt was abandoned 13 years later after over 22,000 workers had died from malaria and yellow fever. We spent a steamy morning strolling the narrow streets of Casco Viejo, admiring the crumbling colonial architecture. A lot of restoration and reconstruction work is underway, and we imagine that in five or ten years the dilapidated buildings of rapidly gentrifying Casco Viejo will be restored to their former glory. 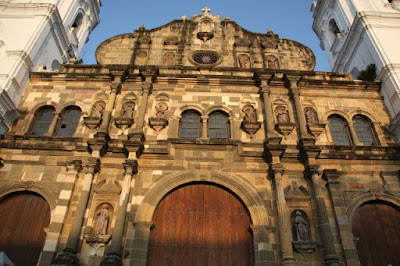 Cathedral, Casco Viejo
Early in the 20th Century, the United States revived efforts to build a canal across the narrow isthmus that was still part of the country of Colombia. An initial treaty signed between the US and Colombia to lease the land for 99 years was not ratified by the Colombian senate, initially blocking the US from commencing canal construction. To get around this problem, President Roosevelt incited rebellion among rich Colombian land-owners in the Panama City region. Colombia ceded the land to the rebellious land owners (who were backed by the guns of the US Navy), and the new country of Panama was born. Conveniently for the US, newborn Panama then agreed to indefinitely lease the land around the proposed canal site to the US and construction began. As the treaty for this lease was signed by a Panamanian ambassador who was not authorized to sign treaties, it became a contentious diplomatic issues years later. Despite this, by overseeing effective sanitation and mosquito-control practices, deaths from disease plummeted and the Panama canal was successfully completed ten years later.
Ships sailing the Panama Canal and the Bay of Panama
After World War II, Panamanians began questioning the wisdom and legality of the indefinite lease of such a valuable commodity. Increasingly violent protests against US occupation of the Canal Zone intensified, and in 1974 a new treaty was signed between the US and Panama, granting Panama control of the Canal on December 31, 1999. Despite fears to the contrary, since Panama gained control of the canal, transit time across the canal has increased and the accident rate has decreased. Not content with making tens of thousands of dollars per ship traversing the canal, we paid the Panama Canal Authority (ACP) $8/person to get a bird’s eye view of ships crossing through the Miraflores Locks. Building-sized cargo ships moved slowly through the locks, guided by small vehicles that resembled Zambonis on rails. With barely 2 feet to spare on each side of the ships, it looked like a tight squeeze. 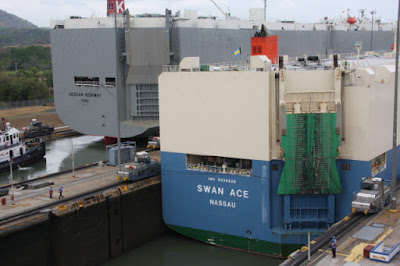