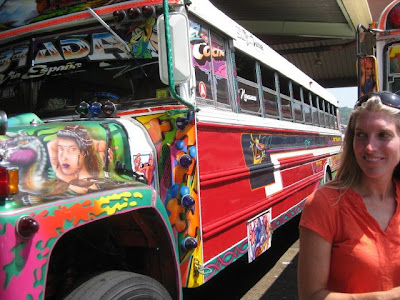 Kristin admiring the sweet airbrushing on a diablo rojo.

This afternoon we enjoyed a little bit of rampant consumerism for the first time since we have left the US eight months ago – we shopped in a mall. Over the last couple of months we have been compiling a wish list, including new clothes, small speakers for our computer, and a new headset. We finally had the opportunity to cross some items off of that list at the Allbrook Mall in Panama City. The previous day we had tried to drive to the mall, but after getting lost, paying an unnecessary toll, and running low on time we headed back to our hospedaje in defeat. Ivonne, our friendly hostess at Villa Michelle, suggested we take the bus next time. Buses in Panama City, like many other buses throughout Central America, are rescued United States school buses reincarnated as diablos rojos (red devils). These colorfully decorated buses fearlessly speed through Panama City’s streets blaring retrofitted air horns to give other cars enough warning to move out of the diablo rojos path. A quarter fare will get you anywhere in the city on a devil, as long as you don’t mind crowding 3 adults to a seat meant for 2 small children. 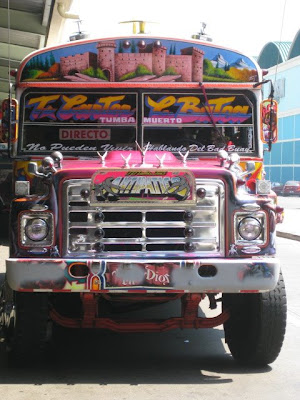 Why stop with just one hood ornament?
Arriving at the giant Allbrook Mall on the outskirts of the city, we were surprised to find Christmas season sized crowds. While unfamiliar with many of the stores, some places looked suspiciously familiar. The Conway store seems to have stolen a page out of Target’s marketing book, with a look-alike logo, bright displays, and dirt cheap clothes. Even the large photo displays and sassy print advertisements made me think I was looking at a Target ad. I think Conway might be pulling a couple of their own tricks that Target could never get away with. I’m pretty sure that Abercrombie & Fitch doesn’t allow their brand to be sold in any stores but their own, especially not a low-cost Panamanian department store. Another thing that tipped us off that some of the brands may be misrepresented was the uneven stitching and fraying seams. Coincidence or copyright infringement? You decide.

Still laughing about the Conway, we came across an even more blatant rip-off. Loud music pouring out of its entrance, scantily clother models, and preppy clothes, the only thing differentiating this store from an Abercrombie & Fitch was its name, Moose. A&F fans will immediately recognize that the moose is A&F’s logo. However, not all of the stores were pirate-copies of North American vendors. A whole section of the mall was devoted to upscale stores like Mountain Hardwear, Izod, Tommy Hilfiger, and Kenneth Cole, that appeared to be legitimate. Walking through the air conditioned mall you could forget you were in the middle of Panama until you crossed paths with a crowd of Kuna women wearing beautiful colored dresses, gold nose ring, and sumptuously beaded leggings. After spending a couple of hours wandering both pirate and genuine stores, items crossed off my list and laden with several shopping bags, we hopped on a diablo rojo and held our breath as we sped back to our hospedaje.