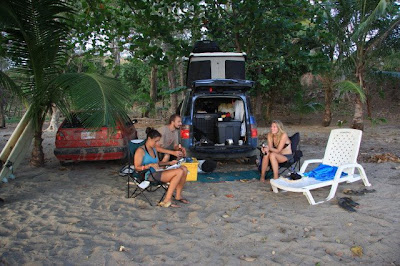 After 4 days in the cool mountains of Panama, we were ready to head back to the warm beaches of Santa Catalina on the Pacific coast. Our friends, Tom and Kelsey, were temporarily stranded on the Caribbean coast when several bridges washed out due to unseasonable amounts of rain so we hadn’t seen them in a while, but we hoped to meet them in Santa Catalina. Armed only with our lousy Lonely Planet maps (which make it look like the Pan-American Highway is practically the only road in all of Panama) we would be relying mainly on road signs for navigation. Speeding east on the Pan-American, we were dismayed by the distinct lack of signs. The few signs that did exist were apparently paid for by car-rental companies, since they were always adorned with National or Hertz logos. After driving for what felt like too long on the Pan-American, we figured that we had missed the unmarked turn-off for Santa Catalina. We asked for directions from an unfriendly trinket vendor who directed us down an unpromising side road. Doubting his word, we stopped to double check with the cashier at the chino (Panamanian grocery and convenience store) who instructed us to take the next right. This miraculously put us on a paved road that led to Santa Catalina. Once we arrived, we set up camp on an idyllic black sand beach, our camper surrounded by coconut trees and shaded by leafy almond trees. While Tom and Kelsey did manage to find us there the next day, they weren’t quite as lucky as us with their directions and wandered bone-jolting dirt roads for several hours before they found their way to Santa Catalina. 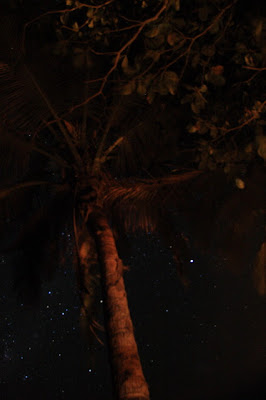 Crystal clear views of the stars through the palm trees

We spent the hot days swimming and reading, the cooler nights admiring the amazing display of shooting stars and crystal clear views of the Milky Way. We are now far enough south that we can see the Southern Cross constellation, but can’t seem to find the Big Dipper anymore. While living without hot water, electricity, or internet access can be refreshing for a few days, we needed to do some research before entering Panama City, so we next stopped in the small mountain town of El Valle. Miraculously there was actually a small, partially obscured sign on the Pan-American directing us to the town. After climbing through the dusty hills from the Pacific, we descended into the lush extinct volcanic crater that houses El Valle. We wandered around the flower-lined streets looking for inexpensive accommodations before we were directed to the Rastafarian campsite owned by friendly Swami. While we felt a bit out of place among the dreadlocked crowd chilling in the lotus position or blissing out in the drum circle, they were welcoming from the start. 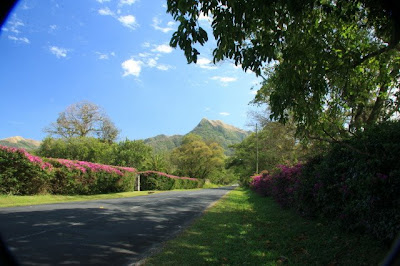 Flowering bushes line the streets of El Valle
El Valle is quite a small town, but we entertained ourselves on the first day by visiting the local hot springs. While these were no Guatemalan Fuentes Georginas or Costa Rican Tabacon, we had fun smearing ourselves with the therapeutic mud and then rinsing off in the slightly stinky and suspiciously cloudy hot pools (we sorely regretted not bringing any cameras). Feeling surprisingly clean, we found a local wireless cafe and tried to catch up on email while searching for an apartment in Panama City. We think we will need at least 1 or 2 weeks in Panama City to figure out how to ship our car around the Darien Gap. With a couple of leads on places to stay in hand, we packed up our campsites and headed toward the canal and Panama City. 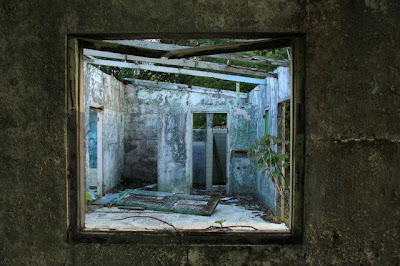