Our original plan was to drive from Arenal to Tortuguero National Park, with a one day detour to Volcan Poas. The largest active crater in the world, it also is the only volcano in Costa Rica with a paved road leading to its summit. After our attempts to see an active volcano at Arenal were thwarted by clouds, we figured we might as well drive up to the crater of a bubbling volcano to take a peek in its sulfurous depths. 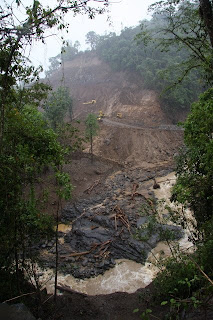 I guess it wasn’t in the cards for us to see a volcano in Costa Rica. A few minutes after passing signs indicating that we were only 37 km away from the Poas Volcano, the road suddenly ended in a tangle of construction equipment building a bridge as the road up a steep hillside. We wondered what had happened. The river below the bridge must have taken on a huge surge of water. Huge fallen trees clogged the ravine and all foliage had been ripped from the riverbanks, leaving only exposed rocks and mud. Later we realized that this spot was close to the epicenter of an earthquake that had occurred a month earlier, and wondered if this earthquake had caused all of this destruction. 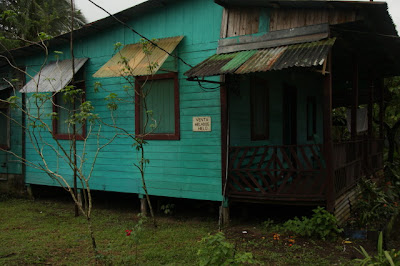 We gave up our plans to visit the Poas Volcano after looking over our maps- it would take us hours of driving to wind our way around to the other entrance to the park. After turning around and backtracking 10 km, we headed for the ‘mini-Amazon’ of Tortuguero National Park. The park is only accessible by boat or airplane, and is home to the small village of Tortuguero. Narrow sand paths wind between colorful houses on stilts. From the soccer field you can practically see across the width of the island to both the black sand beaches of the Caribbean Sea and the muddy waters of Laguna Tortuguero. Dodging the periodic downpours that temporarily flooded the sandy walkways, we wandered the island for the afternoon and sampled the delicious Caribbean dishes.

The next morning our knowledgeable and strong guide, Roberto, paddled us in a canoe through the park for 3 hours. While we had to don our raincoats a couple of time for brief showers early in the morning, after an hour the sun broke through the clouds. Drifting quietly among thick carpets of lush vegetation and towering walls of royal palms, we observed the abundant wildlife. Three varieties of herons stalked through the weeds, small yellow-beaked jacanas scampered across floating plants, grinning caymans sunned themselves on logs, and iguanas and other lizards perched on branches. We saw a bright blue and green basilisk lizard, which looks very dinosaur-like due to a crest on it’s head. The nickname for this reptile is the “Jesus Christ Lizard” from his ability to run across the surface of the water on his elongated webbed hind feet in order to avoid predators. Spider and howler monkeys leaped through trees and clambered down branches while feasting on leaves. The tour completed, we managed to time our boat-ride back to our car perfectly too, as the skies opened up with deafening downpours for the rest of the afternoon. Hopefully the rains will let up as we travel further south down the Caribbean coast.