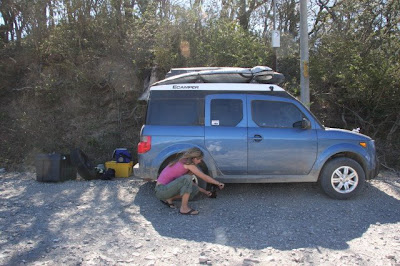 A bumpy, dusty ride punctuated by six river crossings brought us from Playa Negra to the beach community on Playa Guiones. The long, narrow, white-sand beach and small town were separated by a band of natural forest, and Chris had his pick of waves on the huge beach break. We spent a relaxing afternoon and the next morning catching waves and reading on the beach before driving to the cloud forests of Monteverde and the small town of Santa Elena. Heading inland from the Pacific coast, it felt like a special treat to drive on pavement after the jolting dirt roads we were used to on the Nicoya Peninsula. This all changed when we exited the Pan-American Highway for the winding mountainous road that leads up to Santa Elena. Steep ravines plunged off the side of the curvy road, and we were glad we brought along a full-sized spare after a sharp rock punctured our tire. When the tire pressure monitoring system light lit up on our dashboard, I first thought we might have a hard time figuring out which tire had a slow leak, as we already dealt with this annoyance once on the Nicoya Peninsula. However, the second I stepped out of the car I could hear a hissing sound over the whipping winds and could actually see the tire rapidly deflating. We kept our fingers crossed that we wouldn’t spring another leak in the remaining bumpy 10 miles to the town of Santa Elena. Flat tires are a daily ritual there, so luckily there were plenty of llanta repair shops to help us out. Tire patched, we found a cheap dorm room at a newly opened hotel and filled up at a local soda, a small restaurant serving comida tipica, or typical Costa Rican fare. 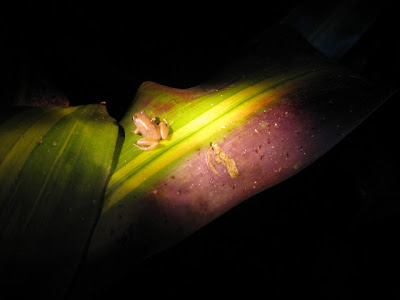 Hiking in the Santa Elena Nature Reserve, we could hear a beautiful variety of birds signing in the misty forest ceiling, and squelched through ankle deep mud on the wet trails. This was one of the first times we hiked through a real jungle on our trip, so we enjoyed the hanging vines, huge ferns, moss-draped trees, and colorful flowers. Afterwards we indulged in home-made ice cream at the local cheese factory (where we decided not to sample to Chocolate Cheese), splurged on an Italian dinner with great red wine, and hit the bunk beds early since we had a 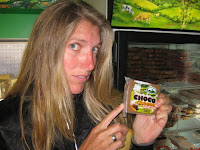 7:30 am guided hike through the Monteverde Reserve the next morning. Our knowledgeable guide pointed out monkeys, birds, tarantulas, poisonous plants, and we were lucky to spot two very rare resplendent quetzals roosting in their favorite place, the avocado tree. The national bird of Guatemala and arguably the most beautiful bird in Central America, quetzals are being driven to the verge of extinction through illegal hunting and loss of habitat. Less than 50% of the visitors to Monteverde ever glimpse a quetzal, so we were very grateful for the sharp eyes and expertise of our guide. Hoping to see even more wildlife, we also took a guided night hike in a nearby forest. As the sun set, lots of cuddly mammals scurried around, foraging for some last food before they curled up for the night. Several cute agoutis (cat-sized gerbils) strolled by, followed by a trotting grey fox, lots of raccoons, and a coati (a raccoon relative). Fireflies flickered in the darkening forest and crickets chirped throughout our hike. Our guide’s binocular-sharp eyes picked out minuscule frogs, sleeping birds, and lots and lots of bugs, and also lured some huge orange tarantulas out of their hovels. Without these guides, I’m sure we would have missed over 90% of these animals, plants, and insects.