We left our sweet lux condo in Nicaragua a day later than we had planned, since we just weren’t quite ready to say goodbye. Costa Rica promised better waves but we were a little wary about our budgets, as Costa Rica is arguably the most expensive of all Central American countries. After a lengthy, disorganized, and bureaucratic border crossing, we headed for the beaches on the Nicoya peninsula of Costa Rica. Our friends Kelsey and Tom were also headed that way so we decided to look for a place to stay together, in the hopes of keeping costs down. We first stayed 2 nights in the booming resort town of Tamarindo, but the speed of development there has far outpaced the town’s ability to deal with the crowds. What was a small surfing and beach village 6 years ago has become a somewhat sprawling town, with a Pizza Hut, the jangling of jackhammers and cement mixers for the new high rises under construction, and bland mini-malls stocked with an oversupply of trinket shops. This rampant and apparently unplanned development seems to be strangling out the smaller thatched roof restaurants and pura vida lifestyle that originally put Tamarindo on the tourist map. It also appears to be straining the town’s resources, as rotting bags of garbage lined the unpaved streets, and the constant vehicle traffic kicked up a thick haze of ever-hovering dust. We toured the winding rutted dirt roads that snake around the coast outside of Tamarindo looking for waves, cheap accommodations, and a more laid-back vibe. About 30 minutes south down rough gravel roads, we reached Playa Negra, a long white sand beach boasting consistent surf, a smattering of restaurants, and stumbled upon Cabinas Marvel. Friendly Californian Bob and his tica wife Margarita rent a couple of small hexagonal cabinas and also make custom bikinis and rash guards for a very reasonable $20 US. While 4 people in a 15 by 15 foot room is a tight fit in the cabina, we couldn’t beat the price and the friendly neighbors. There are a lot of animals around here: 3 dogs and a parrot make up the pets, and last night we had a toad bigger than your fist hop onto our patio while howler monkeys growled in the trees down the road. We think we have found a little bit of paradise here, so we are going to stick around for a while. There is a choice of 5 different breaks within a 30 minute drive and we keep expenses down by cooking most of our meals. Our standard day is a morning surf session, a lazy afternoon napping outside in our hammocks lulled by warm breezes, then back out of for another afternoon surf session followed by a few litros of the local beers. Not really much is happening here and that’s why we are loving it. 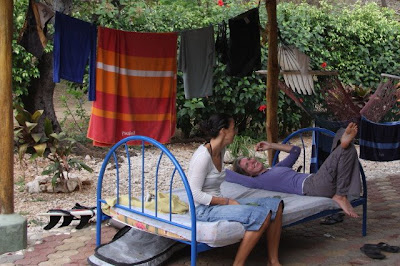