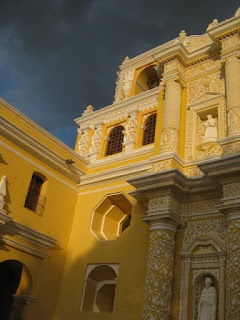 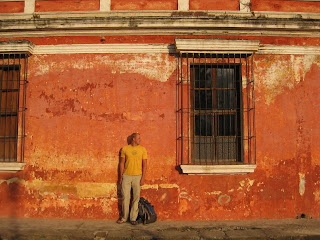 After the slightly gritty, gothic feel of Xela, Antigua felt like a European paradise. Antigua was founded in 1543, but was mostly abandoned in 1776 after an earthquake destroyed the city. By the mid 1800s, people were returning to Antigua to rebuild. Brightly colored houses line the wide cobblestone streets mixed with the crumbling ruins of churches. Antigua definitely has a ‘discovered’ feel as the streets are filled with camera-toting gringos while Italian and Chinese restaurants compete with cigar and wine bars. Guatemala is one of the most volcanically active countries in the world, and the three volcanoes that pierced the near horizon were a reminder of the city’s dramatic history. 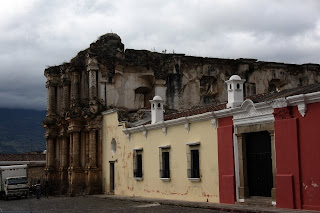 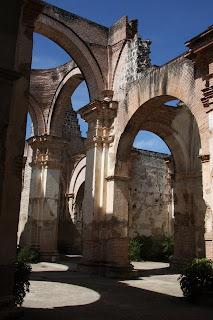 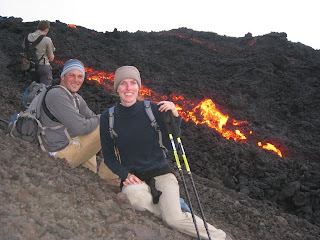 One afternoon we took a guided trip with Old Town Outfitters to climb the active Volcan Pacaya hoping to see some activity. The Pacaya volcano erupted in 1965, and has been in a state of continuous eruption since. It seems to be hit or miss: some people we talked to said they didn’t see any lava, but their friends that climbed a week earlier did.

As we got out of the tour bus, hoards of kids clamored around us trying to sell walking sticks for the slipper ash slopes high on the volcano. We had our hiking poles (ski poles) with us, but this still didn’t stop one young entrepreneur from telling Chris that his lightweight collapsible poles were no good, and what he really needed was a good sturdy stick. As we hiked out of the small town and through farmland, Chris tried to casually ask our guide Renaldo how “safe” climbing an active volcano was, and his response was, “very dangerous, be careful”. Unfortunately his English was not good enough to give any details of what we needed to worry about. He did have duct tape wrapped around his shoes, and he explained that his shoes were melting from the heat of the ground. This did not 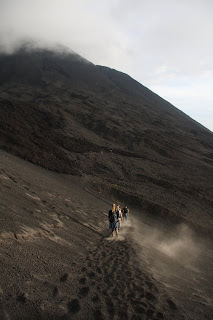 make Chris very comfortable. If the ground is hot enough to melt your shoes, doesn’t that mean there is a thin layer of rock between you and a underground river of lava? We decided to stay away from any shoe melting areas in order to be safe.
After passing through the lower forests of the volcano, we entered into a weird moonscape completely devoid of vegetation. Scrambling over loose ashy rocks we followed a ‘path’ up the side of the volcano to the area of most recent activity. We weren’t sure what to expect, but I don’t think we ever imagined that we would be toasting marshmallows over open pits of molten lava. I don’t think most of the people coming up the side of the volcano expected this either, since you could hear everyone who came over the ridge scream explicatives of amazement when they saw the red glow. Sitting on the rocky slope, we watched glowing flows of lava churn and roll down the side of the volcano. After admiring the fiery show for about an hour and watching the sun set across the valley ringed with other smoking volcanoes, we headed down for dinner and the ride back to Antigua. Looking back up at the volcano in the pitch black night we saw the flowing lava illuminate the clouds above with an eerie pink glow. 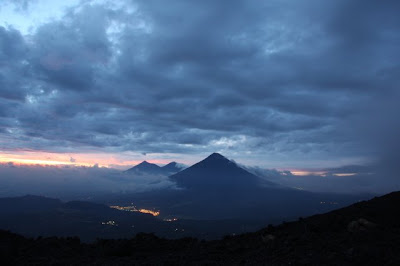 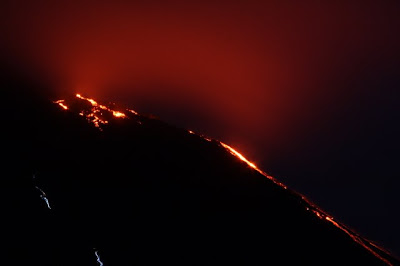