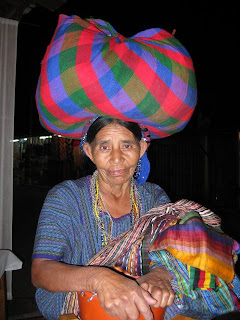 With much regret we said goodbye to the Castillo family that we have been staying with for the last three weeks on Monday morning and drove to Lago Atitlan. This lake has been called one of the most beautiful in the world and is ringed with small towns of varying different characters as well as many dramatic volcanoes. A couple of years ago, Sergio sold televisions to the owner of a hotel in the town of Panajachel on the lake, and he kindly called ahead to guarantee us a reasonable price at the hotel. The warm breezes at Lago Atitlan were a welcome break from the cold fog of Xela, and Panajachel felt like a beach town. Colorful open-air restaurants perch on the lakefront while rows of vendors hawk handcrafted Guatemalan items alongside tourist trap trinkets. I think you can buy the same beads and rasta hats in any tourist town between here and Bangkok.

We spent an uneventful afternoon and evening eyeing the crafts, eating, and chasing off the many children pestering us to buy trinkets from them. These children will cling to your side without feeling the least bit rejected as you repeat the word ¨no¨ to them. Ignoring them doesn´t help; we tried that tactic and ended up having a boy standing at our table paging through our guidebook as we ate dinner. It breaks your heart to see these kids try to make money for thier family, but a guide in San Cristobal, Mexico told us that giving money to these kids encourages them to stay out of school.

That night we were awakened by a terrific windstorm that whipped the avocados off the trees onto our car and set off our alarm. The gusty winds continued the next day, so rather than braving a boat across the lake we decided to drive to another small village on the lake. A bump and dusty ride on gravel roads through farms and small villages followed by a road that put highway 1 in California to shame with its steep grade and crazy curves brought us to the town of San Marcos de la Laguna. This town is a hippy Mecca and is known for its yoga, massage, and meditation workshops. Small paths wind through the jungly forest and along the lake side connecting most of the restaurants and schools by foot. We thought we found an ideal place to stay on the lake; it had parking, killer views, and was cheap. Little did we know that the rooms also came pre-infested with huge spiders. As soon as the sun went down, we came back to the room and found large spiders clinging to the walls of the room. The closer we looked, the more we could see, making us wonder how many more were lurking in the shadows. After unsuccessfully trying to kill a few of them, we decided to sleep in the car. 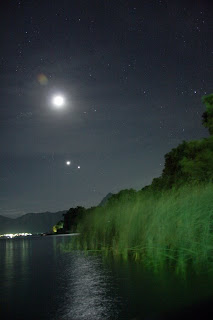 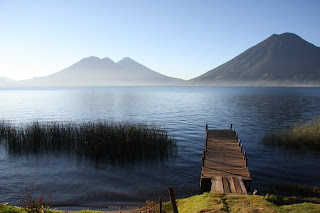