After the morning fog on Saturday burned off (see our art film on mornings in Xela here), we met up with four friends to spend the day at the indigenous village San Andres Xecul (shea-kool) for its annual festival. 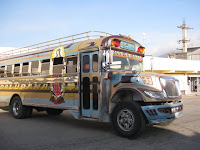 After meeting Ben, Krista, Kelsey and Tom outside our Spanish language school ICA in Quetzaltenango, we walked north to find a ‘chicken bus’ that could take us to Xecul. It turns out that old school buses don’t die, they just get shipped to Guatemala and converted for use as public transportation. The conversion process includes a custom paint job, a booming sound system and pimped out accessories such as an air horn and a Mercedes logo mounted on the grill. 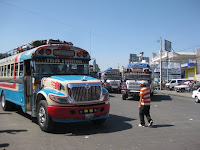 Bus drivers work in tandem with an ayudante, or helper. The ayudante seems to magically float on, around, and on top of the chicken bus. At one moment he is collecting our 3 Quetzales (0.40 USD) fare, the next he is weaving his way through the throngs of people to hang out the front door and shout out the bus destination. As the bus slowly winds through small towns, the ayudante will jump out and ply the streets for more customers, then run and jump back onto the moving bus a few blocks later to squeeze people into the seats and aisle to maximize the amount of passengers the bus can carry. If you get on the bus with more chickens than can fit on your lap, the ayudante will lug your package to the top of the bus, then swing into the bus through the back emergency exit door as the bus rolls down the road. 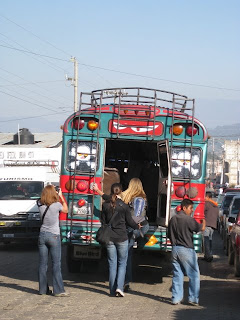 Walking several dusty blocks to the chaotic central bus station of Xela, buses sped past us honking as the ayudante hung precariously from the open door shouting the bus destination. As our group of six tall, fair foreigners arrived in the central bus terminal, we were immediately swarmed with people offering rides. Every bus is named, usually after the driver’s daughter or mother, and the bus we boarded for the trip was named Graciella. Men and children selling sweets, ice cream, and what looked like jello shots made their way through the bus shouting their wares and prices. The bus was packed full, with three people to a seat and standing room only in the aisle, but as usual the ayudante somehow made his way through to collect the fares. After a bumpy 20 minute ride we arrived at the dusty crossroads of Morales, and the ayudante waved us off the bus toward a waiting bus for San Andres Xecul. This bus sped up through fields and farms to the deforested hills surrounding Xecul, blaring its horn at every passing vehicle.

We arrived in Xecul as the marimba orchestra was testing the decibal limits of the band’s wall of speakers. Vendors crowded the narrow streets selling baskets, sugar cane, sweet bread, handmade candies, and the typical assortment of cheap trinkets found at many county fairs in the US. We headed uphill to the hallucinogenic church dome that poked above the surrounding cement buildling. Painted circus red, yellow, and blue and adorned with grinning cherubs, dancing tigers, and climbing vines, this church faced the central plaza and ground zero for the fair. 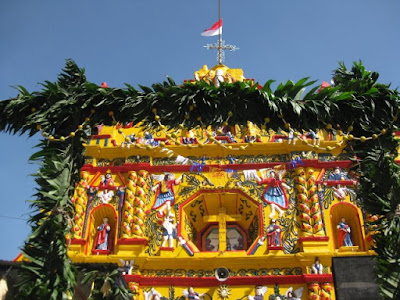 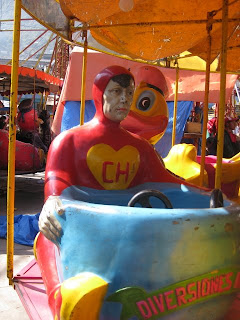 Rickety faded amusement park rides that I imagine had their heyday in the US in the 1940s were set up in the central square, and filled with shouting children wearing multicolored traditional clothing of the local indigenous people. This was a green fair: all of these rides were hand powered by men heaving levers or simply pushing the rides to keep them moving. After losing a couple of quetzales trying to land a coin on plates floating in a kiddie pool to win a soda, we headed to the church to see if the décor inside matched the outside. Neon lights illuminated the central altar, and hundreds of candles were burning as women prayed and children sat quietly. While we could still feel the pumping bass of the marimba band coming from outside, the relatively quiet church was a welcome break.

Back in the central plaza, following a speech of mixed Spanish and K’iche (the local Mayan language) and some earsplitting fireworks, a crowd gathered around a roped-off area. Three men adorned in sparkling costumes and wearing freaky masks (we think they represented Spanish conquistadors) began to dance haltingly back and forth as the crowd watched. Larger groups of dancers dressed in black and white bedazzled monkey costumes, or yellow and black spotted tiger costumes made their way into the roped-off area and danced as a group. They jumped forwards and backwards, hoping from one foot to the other, facing each of the 4 cardinal directions, before bowing to the crowd. Over and over, individual dancers faced the crowd, shook their rattle and beat their whip on the ground, then stood still while cupping their hand to their ear. After watching for about an hour, we headed back down the hill to catch another chaotic yet entertaining bus back to Xela (click here for a video of our day in Xecul). While we enjoyed the chicken bus experience, it made us appreciate having a our own car for transportation. We couldn’t imagine riding for 6 hours packed into the back of cramped school bus on the way to Tikal. 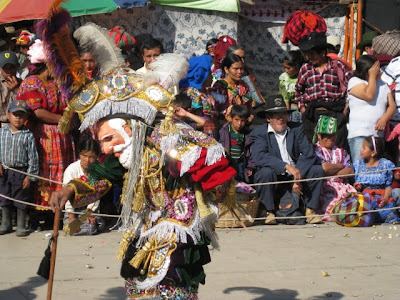 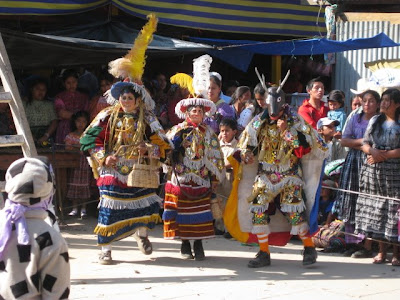 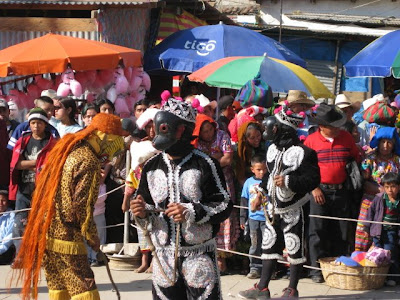 Saturday evening Shirly and Sergio dropped the kids off with their parents so the four of us could explore Xela’s nightlife. This is our last weekend in Xela, and we are very sad to be leaving our Guatemalan family. We shared two pitchers of cerveza mixta, another Guatemalan specialty made from a combination of the light lager of Gallo and a darker porter called Moza, at Cantina Tecun. This bar is the oldest in Guatemala, and serves up some mean pizza. Sergio and Shirly wished us luck on our travels, and told us that whenever we returned to Xela we would have a home with them. They also gave us a bottle of an indigenous alcohol called Quetzalteca and a tablecloth. In our halting Spanish we thanked them for welcoming us into their home and family. As the night continued and the litros of Cabro disappeared, we listened to live music in a small bar as all of the locals shouted the words along with the singer. We leave the Castillos on Monday for two weeks of travel through Guatemala to visit Lago Atitlan, Chichicastenango, Antigua, and Tikal. 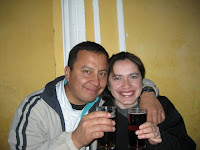 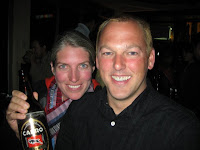 (Shirly and Sergio with cereza mixta, Chris and Kristin much later in the night with a litro of Cabro)