We successfully crossed the border between Mexico and Guatemala on Saturday November 8. We spent the previous evening in Comitan, a town close to the border, but far enough away to be removed from border problems. According to the International Migration Organization, one out of every ten Guatemalans live in the USA as of 2003. Mexico is fighting the same losing battle as the United States in trying to stem the flow of illegal immigrants and drugs migrating across their southern border. With more than 1/3 of the population of Guatemala living on less than $2 USD a day, it is easy to see why over 100,000 Guatemalans risk their lives trying to cross through Mexico to enter the United States every year. We woke up at 6 in the morning in order to get an early start, as it is best to be off the roads in Guatemala by the early afternoon. We arrived at the Mexican immigration office just as they were opening at 8 AM, and after about an hour we were back in the car heading towards the Guatemalan border. After ten minutes of driving, the road seemed to disappear in a crowd of people and crude market stalls. Not knowing what to do next, we drove at a slow crawl while unconerned people moved slowly out of our way until we came to an orange cone in the middle of our lane, and a small chain link fence extending from both sides of the road. A man in a blue uniform asked us to get out of the car, and then proceeded to spray down the inside and outside of the car with an strong citrus scented insecticide. I am not sure what I was expecting the border to be like, but it definitely was not this. Looking to the side, you could see cement posts placed every 50 yards up the hillside marking the border. After paying for this unusual car spray down, we spent another hour getting all the payments and papers processed for Guatemala. We then got back in the car and fought our way through more street markets. While it took about 2 hours to get our papers in order, passports stamped, vehicle import permit, and fumigate the car, in general it was a pretty painless process. It felt strange to be able to actually see the border between two countries stretching up the hillside. 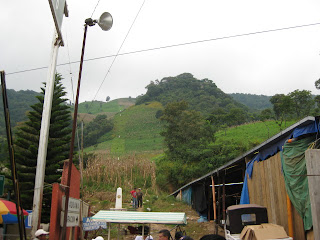 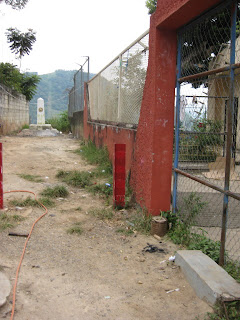 A street market had taken over the main highway that ran through the Guatemalan border town of La Mesilla, so after a quick detour through some narrow streets that wound through small neighborhoods, we continued on the Pan-American Highway to Queztaltenango. Locals refer to this bustling town as Xelaju (shay-la-who), which is the original K’iche name for the pre-Hispanic site. The K’iche people are direct descendants of the Mayans, and they make up about half of the town’s population. They are easily recognized, as their clothes are a riot of different colors and patterns, but they seem to be completely integrated in to modern life, as we see them in McDonalds, talking on cell-phones, and riding noisy scooters around town. Xelaju is the somewhat gritty commercial center of Western Guatemala, and has a mix of beautiful crumbling colonial homes and churches around the central park that contrast with the typical cement-walled and tin-roofed homes of most of the inhabitants. The views from the city are shrouded in fog mornings and evenings, but during the sunny afternoons two dramatic volcanoes grace the horizon. We decided to stay in Xelaju for several weeks to live with a local family and take intensive Spanish lessons. 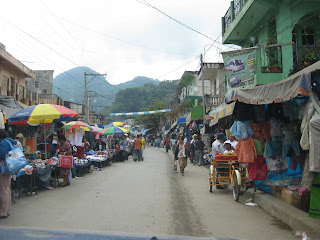