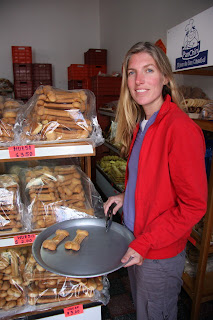 We’ve been awakened by many different unusual noises in Mexico: braying burros, phone call announcements, marching music, and howler monkeys. The morning of November 1st in San Cristobal de la Casas, it was church bells and fireworks. Dia de los Muertos (Day of the Dead) is a holiday that has evolved in Mexico over hundreds of years, combining both pre-Hispanic and Catholic traditions. Pre-Hispanic Mexicans traditionally welcomed the visiting spirits of the dead into their homes a week after the autumn equinox by building arches of yellow marigolds over the doorways to provide a portal for the spirits to enter our world. Food and drink were placed under the arches to welcome the spirits when they arrived. After the Spanish conquest, this pre-Hispanic celebration was combined with the Catholic holidays on November 1 and 2 of All Saints’ Day and All Souls’ Day, which shared similar traditions. These traditions have continued to evolve, and today people celebrate by visiting the graves of departed loved ones, decorating the graves with marigold flowers, pine needles, food and drink, building altars in their households, and visiting with family.

We visited the towns of San Juan Chamula and San Lorenzo Zinacantan, both about 3 miles outside of San Cristobal de la Casas, to observe their Dia de los Muertos celebrations. We went on a tour organized by “Alex and Raul,” although our guide was actually named Cesar. He provided interesting information on the culture and traditions of the communities we visited throughout the tour. Chamula and Zinacantan are both Tzotzil villages, an indigenous group directly 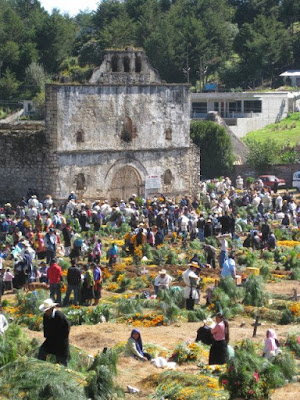 descended from the Mayan civilization. Chamula is a fiercely independent town that has autonomous status within Mexico, allowing them to have their own police force and local government. Mexican police or military are not allowed in the town. They are very suspicious of outsiders, as they have been fighting to maintain their culture since the Spanish invasion and still feel threatened by Christian missionaries. Photography of the Chamulan people, the interior of their church, or any religious ceremonies is not permitted, but Cesar did let us know when it would be appropriate to discretely take some pictures from a distance. As we descended into the Chamulan valley we saw hundreds of families gathered around graves blanketed in orange flowers and fragrant green pine needles, playing music on guitars and harps, sharing meals and a strong sugar cane liquor called posh. Chamulan people wear the traditional clothing of their ethnic group: the women wear colorful silk blouses and homespun black wool skirts, and the men wear black or white jackets made of the same fuzzy fabric. Ringing church bells and ceremonial firework explosions echoed through the valley as we walked around the graveyard to the town center. Across a large marketplace men rang church bells, and as we neared the church, clouds of aromatic pine incense called copal billowed from the church door. Chamulan tradition considers copal to be the food of god, just as corn is the food of the people. Leaders of the Chamulan spiritual community gathered in front of the church, setting out lines of coke bottles filled with soda as offerings to visiting spirits. Younger men packed gunpowder into narrow metal tubes to shoot off homemade fireworks. Traditionally, cane sugar juice was used as offerings to the gods and to draw out evil, but Coke and Pepsi have largely replaced that as a more readily-available alternative. 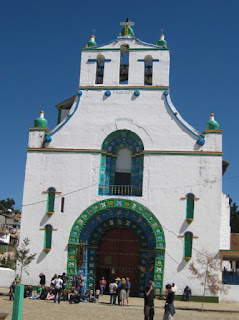 We entered the church and carefully made our way across the stone floor, slippery with a layer of pine needles. Cesar explained to us that this church is no longer under the control of the Vatican, and priests are only allowed to visit monthly to baptize newborns. Statues of saints in glass display boxes lined the church, many of their faces covered with colorful clothes, so that the spirits of bad people who had returned for the day would not be able to look at their faces. People sat in a large circle around the altar in the middle of the church, sharing posh, sweet bread, and a milky corn stew. The altar was covered in orange flowers and surrounded by pine needles and white candles. These offerings are typical of many Chamulan ceremonies. Flowers are considered to be the food of God, and pine needles represent the people for whom the prayers are being said. White candles represent mother earth, god, and purity. Posh is often used in healing ceremonies to strengthen people and liberate their soul from evil spirits.

Afterwards we visited the home of a spiritual leader. Dried garlands of herbs and flowers covered the beams of the house and the air inside was thick with overpowering copal incense. The spiritual leaders stood behind a table draped in flowers, pine needles, and flickering white candles. As the musicians played an eerie repetitive chant, the leaders removed layers of colorful cloths from several crosses and statues. These cloths will be washed and used to cover the crosses and statues again once they were clean. Deafening explosions shook the house as men blew up fireworks outside. Small glasses of posh were passed to us to sample, which had a fiery taste like a rough tequila. Slightly muddled from the loud explosions and copal smoke, we made our way to the next town, which was blissfully more quiet. 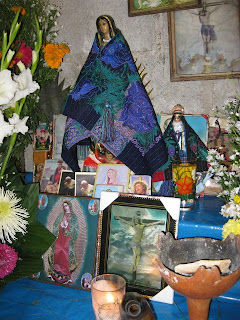 San Lorenzo Zinacantan is a more prosperous village than Chamula, and their Dia de los Muertos celebrations are significantly more reserved. They are a distinct Tzotzil group from the Chamulans, and wear beautiful black cotton clothing embroidered with intricate turquoise, purple and blue floral designs. We visited their church, bells ringing, to observe their colorful altar with food and drink offerings for the dead. We also visited a family’s home to learn more about traditional Tzotzil healing practices. The women of the house sold scarves, table cloths, tortilla wrappers, and other handwoven clothes, all brightly colored with intricate designs. One of the younger women made tortillas in a simple cement room furnished only with a small table and a large fire at the center of the room.

The next day, we wandered over to the large cemetery in San Cristobal de la Casas. Dia de los Muertos celebrations continued there, and the graveyard was thronged with crowds of families. Vendors pushed carts selling sweets, soda, fruit, and chicharron, a delicious and highly unhealthy fried food that is covered in spicy chile and lime. Bands of musicians roamed the graveyard, stopping to sing and play traditional songs for groups surrounding their family’s graves. Some graves were simple mounds marked with wooden crosses; others were large mausoleums with glass doors, altars, and pictures, but most were surrounded by families and decorated with candles, orange marigolds, and pine needles. The atmosphere was festive and celebratory, and we discussed how different their views on death and loss (at least on this day) seem to be from the somber atmosphere you would expect in graveyards in the US (click here for a video of our Dia de Muertos experiences) 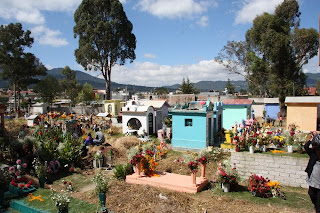