Oaxaca is a beautiful smaller city, with many colonial buildings housing artists’ galleries, museums, and delicious restaurants (as well as the omnipresent stone churches and a shaded zocalo). At this point in our trip, we’ve perfected the art of wandering through cities, window shopping, and soaking up the culture. We also spent a day exploring the ancient ruins of Monte Alban, the ancient capital of the Zapotecs. It is situated high on a hill with 360 degree views of the surrounding Oaxacan valley, and was occupied from 500 BCE to 700 ACE. Some of Oaxaca’s culinary specialties include: creamy hot chocolate, made with cocoa, vanilla, cinnamon, and almonds; tlayudas, which are large crispy tortillas filled with beans, avocado, and meat; and fried grasshoppers. Chris tried the first two, but declined an offer to sample the fried grasshoppers by a woman selling them out of a large basket in the main market. By mistake, I may have had the most unique meal. I think I ate liver by accident when I didn’t understand the waiter’s description of my order. 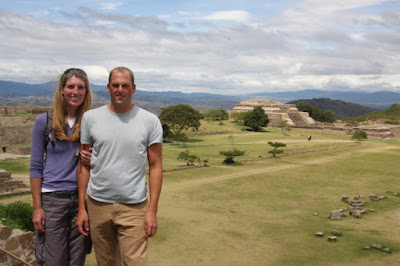 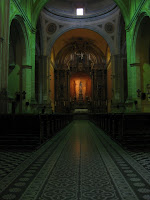 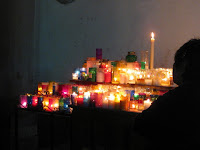 We also decided to look around at the various items for sale in the town. Oaxaca is known for its handicrafts, so when we saw a street vendor selling wool rugs with beautiful designs, we stopped to take a look. After admiring a few designs, Constitine, the vendor, started talking prices. We told him we would stop by later after looking around. We did find other rugs at lower prices in other stores, but still liked his designs the best. As we walked out of one of the artisan cooperatives in town, we found our new friend Constitine waiting for us. He wanted to know if we were ready to come back and look at his rugs again. We walked back with him and agreed to a much lower price. I liked the rug much more after looking at his card, seeing that his shop is located in the famous weaving village of Teotitlan del Valle. This village has been producing cloth for hundreds of years – Teotitlan used to give Aztecs cloth as tribute. His story about creating high quality products using traditional natural dyes seems to be valid. His card says you can stop by his workshop at any time to see how his rugs are produced. We are planning to head that way, so we may take him up on the offer. 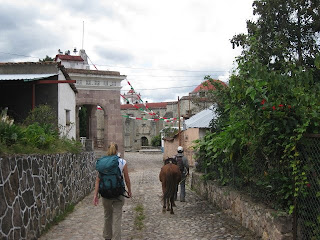 After several days in Oaxaca, we headed for the hills of the Sierra Norte. Many of the small Zapotec villages in this mountainous area have formed a community, Los Pueblos Mancomunados, where tourists can hike, mountain bike, or horsebackride between the different villages. The villages have built very nice cabanas with fireplaces and nearby comidas, which serve delicious food to fill the stomach after a long day hiking. We were a little over-enthusiastic when we planned our trek, however, and limped into each successive village after too many miles with too much elevation change each day. We first hiked from Cuajimoloyas to Lachatao, and while the 17 mile hike itself wasn’t that interesting, we ended our hike in a beautiful valley spotted with small villages. We were pleased that our cabana was located across the cobblestone street from the 17th century church at the center of the town. We were surprised, however, to find the peacefulness of the small pueblo broken every couple of hours by an announcement made from large loudspeakers on top of the old church. Our Spanish is still not good enough to understand the fuzzy echoing speech. The speakers also served as an alarm clock around sunrise the next morning by blasting marching band music, followed by the ringing of the church bell for several minutes. During breakfast the friendly town doctor explained the announcements to us; the town has only one phone, so incoming calls are announced, and the receiver of the phone call has 10 to 15 minutes to get to the phone to accept the call. We forgot to ask why the marching band music was blasted through the town, so I guess it will remain a mystery. 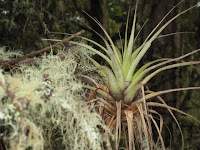 Another punishing hike through the mountains the second day was made slightly more humiliating by the fact that our guides were all grandparents who had been hiking the hills their whole lives. This hike was much prettier than the earlier day, as it followed a rushing river as it wound up the mountains through trees draped with moss. This is the first time we have seen a forest of trees that have bunches of agave plants and cactus growing in them, along with a few trees that had thin, long tubular cactus draped across their branches. Our very knowledgeable guide, Javier, enthusiastically explained many of the plants and animals to us in Spanish and I think we managed to understand a third to a half of what he said. He showed us horsetail, which is used to cure an upset stomach, fields planted in the traditional fashion with corn and beans growing symbiotically, and berries that when crushed create a bright red juice which is used for dying cloth. He also would give us names for plants and animals in both Spanish and Zapotec. Javier has been a guide for eight years, and the reason for 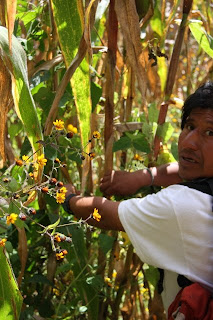 his strong knowledge about the area is that his parents took him into the forest ever since he was a little boy, teaching him about the plants and animals. We stumbled in to Latuvi later in the afternoon, where we enjoyed another meal in the local comida before building a fire in our cabana to keep ourselves warm while we tried to stay awake until the sun set. The next morning our plans changed slightly as I was unwittingly given a peanut-laden cookie with my hot chocolate (of which I only ate a very small amount). Since I am very allergic to nuts, it was relieving to both of us that the reaction was very mild. We decided however to cancel the day’s hike. I was hesitant about embarking on a 6 or 7 hour hike up 4,000 feet. Every cloud has a silver lining though; Chris and I had been dreading this last leg of the route, given how sore and tired we were from the previous two days’ hikes, so we welcomed the excuse to take a cab to return to our car in Cuajimolayas. 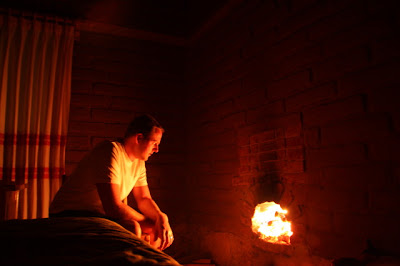