We set an alarm for the first time since we could remember, and woke to the painful sound of electronic beeping. We wanted to get an early start, as the Castillos recommended that we stop to check out the ancient ruins of Xochicalco (pronounced so-chee-kal-ko) on our way to Puebla. This was great advice, as we spent several hours exploring the museum of artifacts and the 10 square km site. In the middle of the large square surrounded by ball courts, temples, pyramids, and other ceremonial buildings there was an unusual audio effect. When you clapped your hands together, you would hear what sounded like the chirp of a bird coming from the top of the pyramids. 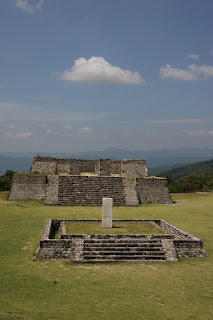 We climbed some of the very narrow, steep steps to fantastic views of the site, and were led through a pitch black ceremonial and astronomical cavern where the sun shines directly down a long hole to create an illuminated beam of light (unfortunately not this time of year). On the Pyramid of the Feathered Serpent, many of the intricate carved reliefs that cover the building are still intact.

We treated ourselves to the cuota, or toll roads for the rest of the trip to Puebla to be sure we were off the roads before dark. Puebla is a large city of over 2 million people, and it didn’t look too promising on the outskirts. However, as we drove into the centro historico, our minds were quickly changed as we saw the beautiful zocalo (main square), many elaborate churches, and multicolored colonial buildings. We were also lucky that we arrived in time for the traditional Sunday evening party in the zocalo, complete with music, families out for a stroll, and the craziest assortment of balloons we’ve ever seen (the video makes this more clear). We spent two very enjoyable days going to archaeological and historical museums, sitting in the cafes around the zocalo, visiting the elaborate churches, and eating quesadillas arabes. We had been 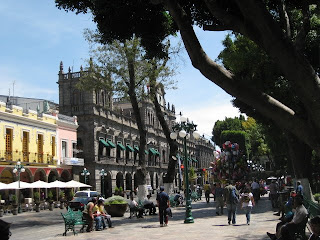 admiring the large spits of meat 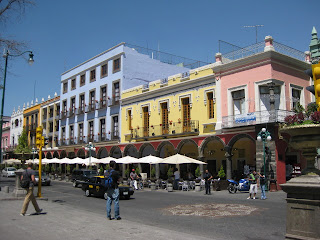 twirling over wooden embers, and watching the restaurant workers carve off thin slices with very large knives. This very tasty pork is rolled up with a fresh Mexican cheese in a soft tortilla that resembles a thick pita bread; we’re not really sure why it’s called quesadillas arabes, but it’s tasty. I also became a little obsessed with the propane tank delivery trucks, and had their catchy tune stuck in my head for several days (see ‘Hidro Gas‘ in our video). On our way out of the city to Oaxaca we had a spectacular view of one of the nearby volcanos that was smoking somewhat ominously.