When getting ready to leave Real de Catorce, we became concerned about finding someplace to sleep in Zacatecas. We didn’t know that El Grito, or Cry for Independence, is September 15. This commemorates the 1810 Grito de Dolores issued by priest Miguel Hidalgo y Costilla calling for rebellion against the Spanish colonial authority. While this did start years of rebellion culminating in Mexican independence in 1822, things didn’t end as well for Hidalgo, as he was captured, executed, and his head put on display for ten years as a warning to other rebels. This day is a huge celebration in Mexico (much bigger than Cinco de Mayo), and many people head to the cities to drink, eat, dance, party, and fill up all available camping and hotel rooms weeks ahead of time. After a somewhat embarrassing and unsuccessful attempt to make a reservation by phone, we decided it would be easier to find a place to stay once we got into town. Worst case scenario we’d have to stay in a smaller city outside of Zacatecas where there would be more availability. We did, however, pass up the first RV camping option we found outside of town. Although 50 pesos ($5) can’t be beat, we weren’t so sure about the herd of goats. 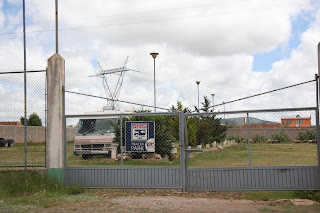 On Saturday September 13 we managed to navigate the narrow, steep, and winding streets of Zacatecas to arrive at the peak of Cerro de Grillo, one of the three mountains that surround the city. Unfortunately, the only available room we could find was at one of the most expensive hotels in the city. We decided to stay there just for the night so we could see some of the city that afternoon. 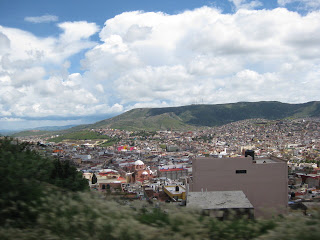 Zacatecas is a beautiful old colonial city, with very few foreign tourists. It reminded us of San Francisco for several reasons: it sprawls over several impressive hills, boasts many excellent culinary options, has narrow streets that become so steep they evolve into pedestrian steps, and at an elevation of 8000 feet, is quite cool and foggy. 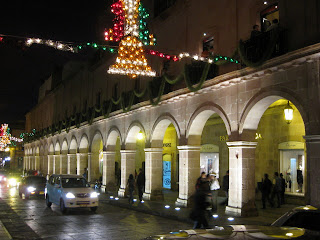 We spent our first night in the lap of luxury, with cable TV (we especially enjoyed the cartoon network en espanol), our own bathroom, drinkable water, and a bed. Whereas in Real de Catorce, we were awakened in the morning by crowing roosters and braying burros, in Zacatecas we were kept awake by roving bands of drummers and trumpeters, and random bursts of fireworks. On Sunday we wandered the city, admiring its cathedrals and squares, and luckily stumbled upon a hostel that had a room available for the next two nights. While clean and conveniently located, the room furnished only with a bed and the shared bathroom was quite a different experience than our previous lodging. But you can’t beat two nights for $40.

Sunday we continued our wandering, sampling the local cuisine, including the very strange but tasty tamarind candy, which was a bean pod soaked in tamarind spices (seeds not edible), bierria (lamb), drinking cervezas, window shopping, chatting with the locals (at least those who wanted to practice their English), and touring the old silver mine, Mina El Eden. This tour was probably quite informative, but as it was en espanol, most of the details were lost on us. From our guidebook, we do know that this mine was operated from 1586 until 1950, and at one point the mines of the state of Zacatecas were producing 20% of Mexico’s silver (mostly for the benefit of the Spanish Empire). 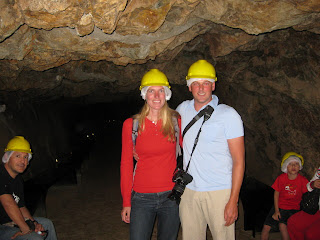 Monday we celebrated El Grito. The main streets in Zacatecas were shut down to pedestrian traffic and vendors selling food, sombreros, scarves, mustaches, beads, and numerous other trinkets containing the colors of the Mexican flag. 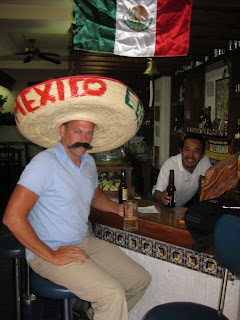 We followed the sound of gunfire across town to see a reenactment of a famous battle for independence on the Cerro del Buffo. We tried to keep our distance from anyone firing blanks after having one go off next to us that was so loud we could feel the explosion. After our hearing came back a group of the re-enactors let us take pictures of them and then offered us sips of their mexcal. Mexcal is a surprisingly smooth drink which like tequila, is made from agave. 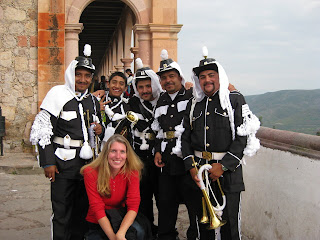 We then headed down the hill to the historical main plaza for mariachi music, dancing, and the craziest urban fireworks display we have ever seen. We tried to capture the feel these two days of celebration with this video, but it doesn’t do it justice.

After meeting three friendly Mexicans, a professional photographer, an assistant professor of mathematics, and a software developer in the plaza we joined them at a local bar to chat. Chris then continued the party at the local fair while Kristin tried to sleep through the fireworks. We are heading through Durango on our way to Mazatlan on the Pacific coast next. 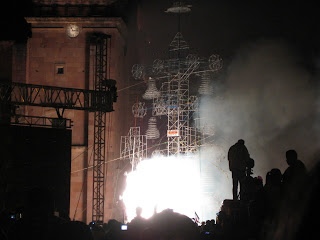