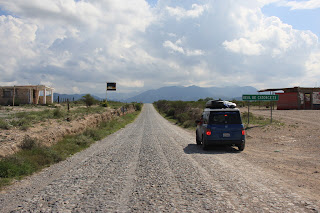 We left Potrero Chico on September 11th to drive to Real de Catorce, a former silver mining town isolated high in the Sierre Madre Oriental mountains.  After dropping Lisa off in Matehuala , we drove west into the desesrt filled with Joshua trees and crumbling adobe buildings.  In the middle of this deserted landscape, we were suprised to turn onto a cobblestone road heading off to the horizon (video here).  We drove over an hour through the desert landscape on this cobblestone road, rarely encountering any signs of human presence except for a group of people hacking at a hillside with pick axes.  The road climbed up the hillside (still cobblestone), passing a large amount of stone ruins before arriving at the entrance to a narrow one lane tunnel (once again cobblestone, of course) cutting through the mountainside.  The tunnel contained a shrine near the entrance, we hoped it would help us make it through safely. 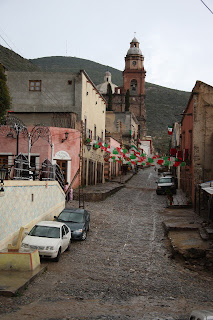 We stayed at Hostal Alcazaba which had camping spots in a garden conveniently across from an old spooky church, graveyard, and abandoned bull fighting ring.  The last stretch of the road was very muddy, as the cobblestone road was in the process of being restored by hand.

Real de Catorce was once a wealthy Spanish mining town founded in the mid 1700s.  By the late 1800s the town produced 3 million dollars of sliver a year.  The town became a ghost town in the early 1900s with only a few hundred people living among the ruins. Today the town is coming alive due to tourism, with stores containing native Huichol art and restaurants specializing in Italian foods.

We took a horseback ride from the center of town to the Pueblo Fantasmo, a ghost town on the top of the hill.  We got a lot of practice speaking Spanish with the guide.  He spent the whole ride up the hill trying to convince us to take a trek into the desert to pick peyote, or at least that is what we think he was trying to accomplish. 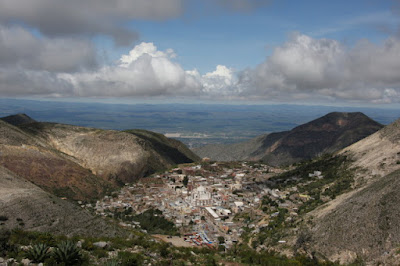 On the top of the hill, our guide dropped a rock down one of the open ventilation shafts of the abandoned mine, and it took around seven seconds for it to hit the bottom.  We also met Angelika, Dario, and Marko, a group of friendly Austrians who invited us to join them for lunch when we returned.  We had lunch at a great restaurant, and found out that they started www.chexpedia.net, a project to bring needed school supplies to Cuban children. 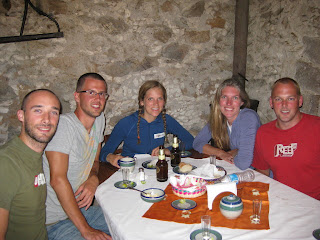 Our next destination is Zacatecas, another silver mining town on our way to the Pacific coast.