We have gotten many questions, both on this blog and from people we’ve met in person, about how the Ursa Minor’s ECamper modification works, and how well we like it. We have definitely observed many people staring at our car or driving next to it on the freeway – we assume they’re trying to figure out why our Element looks a little different than other Elements.

I think it’s easy for us to say first off that we love the ECamper. Putting up and taking down the ECamper is extremely easy. The top is strong and lightweight, and while the car does look slightly different, the ECamper is well integrated with the Element. We opted for the white top, as we thought if we matched the camper top to the car (darker blue) it would get too hot in the ECamper. The fabric that makes up the sides of the ECamper (when it’s popped up) is thicker than tent fabric, so it stays much darker than a tent, which makes sleeping all the more comfortable. We heard that some car modifications can change the braking and/or steering of the vehicle. We did not notice any difference in the handling of the Element after getting the ECamper installed, which may be due to the lightweight materials used in its construction. We have not yet slept in the ECamper during a rainstorm, but we did take the car through a carwash, and we did not find any moisture in the ECamper afterwards.

We love the details the ECamper folks thought of:

1. They installed a handle and lock inside the car on the rear door. This seems unimportant until you try sleeping in the car without an interior rear handle (see our previous urban camping post). It is very annoying to crawl to the front doors when you want to get in or out. So we can easily open and shut the door from inside the car.

2. They installed a great LED dome light on the ceiling of the Camper, and there are also individual adjustable LED reading lights for each side, so you don’t have to mess with headlamps/flashlights when you’re up in the ECamper.

3. There is an on/off switch for the LED lights in the ECamper that has been installed in the car itself, so if you think you may have forgotten to turn off the lights, you don’t need to pop the top back up to check.

4. At the foot of the ECamper, and around the sides and above the head section, you have the option of opening screens for ventilation, or you can unzip the sides entirely if you need to hand things up to people in the camper from outside.

We only have a few minor comments in terms of things that could be improved on the current design: 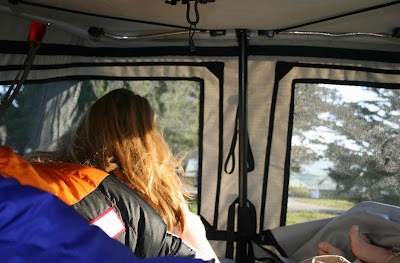 1. There is some slight additional road/wind noise from the sunroof when driving the Element now that we installed the ECamper, mostly when you have a crosswind. The panels do not fit as tightly as the sunroof panel that was there before, and some air does flow through the ECamper into the Element. In some ways this is probably a good thing, as it should keep the ECamper aired out and dry. We did drive our car on a long weekend trip with four people, and we did not have anyone in the back noticeably more cold than the front passengers, so other than some wind noise I don’t think it matters.

2. The sleeping pad isn’t super thick. Definitely more comfortable than nothing, and I’m getting more used to it each time, but it compares to a thin Thermarest. I think it’s a trade-off – to keep the profile of the ECamper as slim as possible, you can’t have a lot of padding. We put a camping mattress on top of the ECamper mattress, and this works pretty well.

3. There aren’t any pockets in the sides of the ECamper (like you would normally find in a tent). It would be nice to have little pockets to keep things like glasses, chapstick, tissues etc more organized. There are cloth rings in the ECamper, so we’re going to hang small organizers from the rings to help with this.

4. It is possible and not too difficult for one person to get up and down from the ECamper while someone else is ‘sleeping,’ but so far I have yet to not wake up when Cornelius has to get down in the middle of the night. However, I don’t know how this could solved, so this isn’t really a complaint, just a comment.

Overall, it’s fantastic and we think we’ve left a lot of jealous people in our wake. If you decide to get yourself an ECamper (which we do recommend) get used to people checking you out when you drive down the road. While the upfront costs of purchasing the ECamper may seem expensive, we figure we only need to sleep in it about 40 times (rather than shelling out for a motel) before it starts paying for itself. 3 nights down, 37 to go.