After six tranquillo days on Panagea ranch, we drove a beautiful route through the heart of gaucho Uruguay to the coast. We stopped halfway to the coast at a canyon called Quebrada de las Cuervas and shared the campground that night with about 200 high school students from Montevidéo. Luckily the campground was large so we managed to avoid most of the chaos. Waking up the next morning we took an interesting hike in to the nearby canyon. The hiking trail consisted mainly of ropes to help hikers scramble down almost vertical jumbles of rocks to reach the rushing river below. After pulling ourselves back up the canyon wall, we continued on to the coast. The weather got cold and cloudy as we reached the beach in the small town of La Paloma, so we pulled out our winter clothes as we set up our campsite by the shore. We were a little worried about the pine trees groaning in the wind around our car. After caballo‘s narrow escape from the tornado, we felt it might be pushing our luck to park below so many creaking branches. One branch crashed harmlessly to the ground about ten feet from our car, so that blessing from Copacabana, Bolivia, still must be functioning. Windworn Virgin greets people on the beach in La Paloma

After a week without internet, we pulled out our laptops in our Wifi-enabled campground and tried to catch up. My heart sank as I read an email from the company we thought we had a reservation with for shipping our car back to the states. Turns out the boat wasn’t going to the US after all. Several weeks ago when we made the reservation, the shipping agent neglected to mention that when they told us a boat was scheduled to go to Florida, there wasn’t actually any confirmed cargo for that boat (and our car isn’t enough to send an ocean tanker anywhere). No shipments had come through, so they were canceling the trip. Panicked I called the shipper and they really couldn’t help us. They recommended we contact K-Line, another shipper, to see if they had any ships sailing. Luckily I quickly was able to confirm a K-Line ship sailing from Buenos Aires to Florida a week later than we had originally planned. Given this change of plans, we had an extra week to burn before we needed to return to Buenos Aires. After spending four days checking out the coastal cities of Punta del Este, Piriápolis, and Montevidéo, we returned to the estancia Panagea for another week of ridin’, wrangling’, and wraslin’. Piglets on the Panagea Ranch

With great trepidation we then returned to Buenos Aires and headed to the port. After dealing with paperwork, corruption, and inefficiency when we shipped our car from Panamá to Colombia, we were ready for a fight. Amazingly, we arrived at the port, met with the aduana (customs) to show some documents, crossed the hall from the aduana to the shippers, and the keys were out of our hands within thirty minutes. The hardest part of the process was actually finding the port. Fingers crossed that the car will show up on January 17 in Jacksonville Florida. For detailed information about shipping the car, please see our Drive the Americas website. Next and last on the agenda for our trip, holidays in Buenos Aires with some family.

While sitting in downtown Tacuarembó (30 minutes from the estancia) using the free Wifi around the town square, our car and its California license plates attracted the attention of a local news team. They brought over a reporter, camera, and microphone, and proceeded to interview us for five minutes in Spanish. For all of our Spanish speaking friends, please try not to laugh too hard at our terrible Spanish. Our Spanish deteriorated under the pressure of becoming a local celebrity. See the YouTube video or watch it below. The subtitles I added indicate what we meant to say, minus all of the grammatical errors and other embarrassments. We marked a milestone in our travels this week: we know when the trip will be ‘done’. We will arrive back in the United States on a not-so-direct flight from Buenos Aires to Panama City to Houston to Miami around midnight on December 30th. Beers at the Waikiki in Panama City, April 2009

After spending a food-, wine-, and Sopranos-filled week with Kelsey and Tom at the lovely beach resort town of Pinamar, we headed north to our ultimate destination, Buenos Aires. We spent a week in Buenos Aires doing a little sightseeing, but mainly running around the greater Buenos Aires area trying to figure out how to ship our car back to the states. Through our Drive the Americas website I had two good leads on potential shipping companies, and one of them, Multimar, offered a good price and good timing. Their next boat was leaving for the states on December 13th, and the car would delivered to Tampa Florida for under $1,300. Relieved that we found an economical option, we booked a spot on the good ship ‘Pluto Leader’ and then tried to figure out the necessary paperwork. Since Multimar typically helps exporters ship hundreds to thousands of cars, they didn’t really know what paperwork would be necessary for one used car being shipped by its owners. After visiting the aduana (customs) in two locations in Buenos Aires and 70 miles away at the port where our ship would sail, we finally found out that (supposedly) we don’t need any special paperwork. A very different process than the maze of bureaucracy we had to navigate in Panama to get our car to Colombia. We’ll see if it’s all so easy when we arrive at the port and try to put our car on the ship on December 6th. And of course I will post full shipping details on Drive the Americas once the process is complete. Sailing from Panama to Colombia, April 2009

We also marked a much sadder milestone during our time in Buenos Aires: we said goodbye to Tom and Kelsey. While we have been saying hello and goodbye to them throughout this trip as we meet up and then travel separately for different periods of time, it has always been a comfort to know that we will see them somewhere in our near future. With both of our trips ending in Buenos Aires in the next month, it finally came time to say goodbye for an indeterminate period of time. While we are discussing a reunion in Rio de Janeiro, Brazil for Carnival in 2010, it will still be much too long of a time before we can share some red wine over a sparking parilla. They have been one of our favorite parts of this trip, and while we are still traveling in Uruguay for a couple of weeks before returning to Buenos Aires for our last weeks in South America, the trip definitely feels like it is winding down. Caribbean beaches of Colombia, May 2009

Stay tuned: while we won’t be seeing Tom and Kelsey in person for a bit, the four of us have a new website in the works…we will announce it here when it formally launches. The end of the raod in Ushuaia Argentina, October 2009 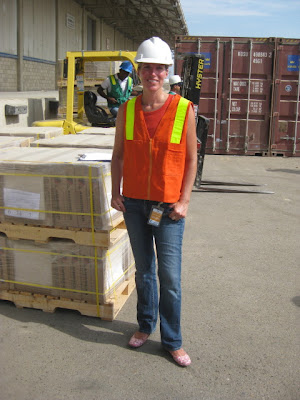