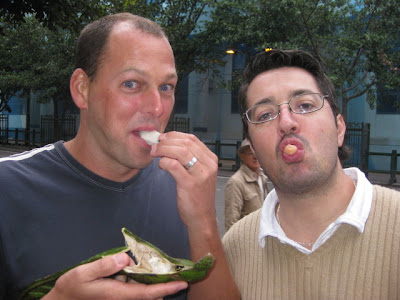 After the quiet of small Barichara and Villa de Leyva, we were welcomed to the sprawling metropolis of Bogota by the welcoming hugs of Karina Ricaurte and her husband Fernando. They ushered us into their beautiful brick building neighborhood perched high in the highs overlooking the vast city. Home to over 6 million people, we almost felt like we were back in San Francisco in this booming city with its doggy day cares, sidewalk cafes, cold foggy nights, and hip young crowds. We were introduced to more of the welcoming Ricaurte clan at a micro brewery that night in the party district of Bogotá when we met Karina’s sister Susana and her husband, also named Fernando. The next day the Ricaurtes took us on a whirlwind tour of Bogotá. We first visited the Museo del Oro, or Gold Museum, home to the world’s biggest collection of pre-Hispanic goldwork. We stared in awe at case after case of gleaming gold statues, jewelry, and masks that guided us through the history and artwork of the many different people and areas of Colombia. Taking a small leap forward in history, we next strolled among the pretty colonial architecture of the Candelaria zone and admired the impressive stone government buildings.

During our afternoon of wandering Bogotá’s streets, we stopped at a street side fruit vendor to sample some unique Colombia fruits. Guama are shiny bean pods that you split open to reveal the furry fruits inside. You just pop one of the guama beans into your mouth, suck off the sweet furry coating, and then spit the huge seeds out. These fruits really tested our limits of being open about trying new things. I thought the furry guama beans lying in their bean shell resembled baby mice, but bravely popped one in my mouth. While the taste was sweet, I just couldn’t get over the furriness. We also sampled mamoncillo, huge round green seed pods you split open to reveal the juicy fruit inside. The slightly slimy fruit slides off of its the huge seed, which you also spit out after you’re finished. I have raved about the huge variety of delicious exotic fruits available in Colombia, but I don’t think I’d add guama or mamoncillo to my greatest hits list. 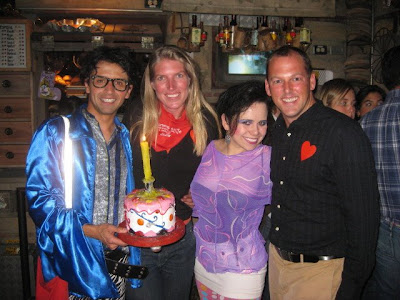 The next day we spent window shopping in some of the hip districts of Bogota before visiting the giant underground Catedral de Sal, or Salt Cathedral. Carved out of an old salt mine 200 feet underground, a tunnel leads between 14 small chapels, each an abstract depiction of the 14 stations of the cross. After getting some religion in the afternoon, we then spent the evening carousing at André’s Carne de Res, possibly the biggest party going on in Colombia at any given time. In the 1990s when Bogotá implemented the hora zanahoria (literally carrot hour) prohibiting bars from serving alcohol after 1 am, interpid André opened a small restaurant just outside the borders of Bogotá where he could serve alcohol until the more reasonable hour of 6 am. It started as a small project to display his ecclectic art, and has expanded over the years to a mammoth restaurant that rocks every night. Beginning even in the parking lot, you know this place is going to be something special. Whether it’s the area where the body guards wait for their celebrity charges, the rows of hammocks to let people sleep off the booze if they’re too drunk to drive, or the fact that the restaurant is longer than a city block and covered in shimmering moving displays of lights, it feels like some kind of crazy combination between Christmas, Las Vegas, and you best friend’s 21st birthday party. Following the free tequila shot at the door, your table request is stuck on your back in the form of a giant heart shaped sticker, and while you wait you can fill up on a variety of fresh fruits set out in bowls all over the place. Squeezing between roving bands of musicians, waiters bearing huge platters of food, and people dancing around their tables, it takes a full 10 minutes to walk the length of the inside of the restaurant. We had a fantastic time meeting more of the Ricaurte’s friends, trying to learn how to dance, and filling up on more Colombian delicacies. Around 2 am we had to admit we were tired and headed back to catch up on some sleep. We wish we had more time to explore Bogotá, but have to keep moving since we need to be in Quito, Ecuador, by May 13.