After leaving Monteverde, we drove through the verdant Costa Rican countryside to Volcan Arenal, one of the most spectacular active volcanoes in all of Central America. There is a slight catch though: the volcano is often covered with clouds since the area gets about 20 feet of rain a year. Unfortunately for us, the volcano was completely obscured by clouds the entire 48 hours we were there. 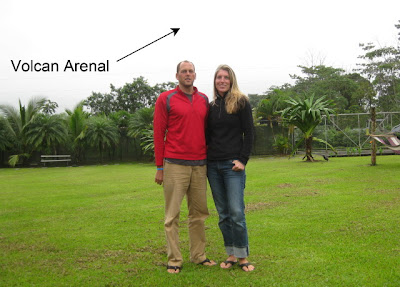 As we’re traveling on a budget that gets tighter and tighter as our trip gets longer and longer, we are working diligently to keep expenses down. We try to buy food in supermarkets instead of eating in restaurants, camp rather than stay in hotels, and hit the tiendas for beer rather than go to bars. After driving for 2 hours around the town of La Fortuna looking for a cheap place to stay, we stumbled upon Cabinas Don Carlos. While their cabinas were about $50/person, they were kind enough to let us park our car on their beautifully landscaped grounds and camp overnight for free. We ended up giving them around $8 USD for their generosity, and got a coffee and juice in the morning in return.

Almost free place to stay in hand, we ate cereal for breakfast, made bean sandwiches for lunch (which are better than they sound), and had a cheap dinner at a local soda. Expenses for the day: about $18. Pretty good, but there was one catch. We do shell out the big bucks if we think there is something special that we should not miss. And we couldn’t miss the Tabacon Hot Springs despite the price. After closing our eyes while charging our $60 day passes on our credit cards, we spent an enjoyable day wandering the lush jungle grounds, sitting under hot waterfalls and in steaming pools, sliding down the hot water slide, and sneaking in beers in our water bottles. So despite spending next to nothing on food and lodging, we ran way over budget after buying the passes. We just couldn’t pass up visiting Tabacon after Chris’s experience there 6 years ago. To bad the price has tripled since then. Good thing we visited now though; at this rate of inflation in another 6 years it would break the bank.