The Sunday market in Chichicastenango lived up to its reputation as one of the best in Guatemala. The main square and surrounding streets were jammed with indigenous people and their small stalls packed with goods. Everything from shoes, underwear, bolts of cloth, fruits, vegetables, purses, and wooden masks was available for aggressive bargaining. We found the best technique was to admire, ask the price, offer less than half of the asking price, barter a little, then walk away if we couldn’t agree on a price. Most times the person would then shout at our disappearing backs that our last offer was OK, although they acted like we were taking food out of their mouths (hopefully not). We bought some beautiful trinkets, and then anxiously awaited for the “Burning of the Devil” to begin. 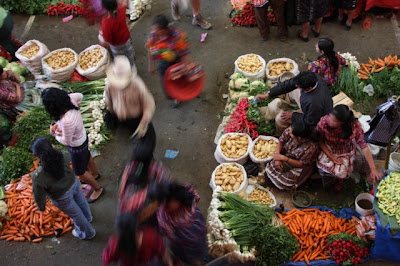 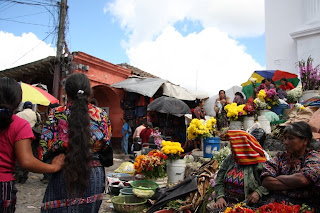 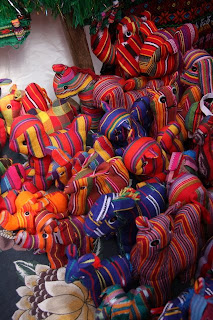 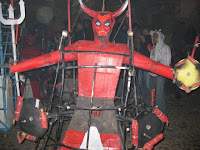 Quema del Diablo, or burning of the devil, is celebrated to varying degrees throughout the country. Effigies and garbage are burned on the streets to symbolize a cleansing before the Christmas Holiday. The party in Chichicastenango far exceeded our wildest expectations. A glowing statue of the Virgin in shimmering blue robes was paraded through the town, accompanied by raucous bands and a quiet crowd of devotees carrying candles. Men ran ahead of the procession to light off deafening fireworks. Shrines to the Virgin, decorated with lights, candles, pine needles and burning copal incense were set up outside many people’s houses on the parade route. The parade stopped at each shrine for a brief prayer, then continued toward the main square for the party. When the Virgin shrine reached the main square, it was placed on the top of the stairs leading into church. It was from this vantage point that the Virgin watched as men wearing devil and sheep “costumes” danced to a marimba band. The costumes were actually metal contraptions covered in a wire structure. It wasn’t till the lights were dimmed and the first fuse lit that we realized these contraptions were in fact huge wire cages covered in fireworks. The brave (possibly insane) men wearing these structures 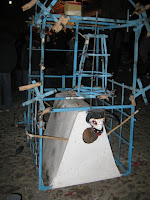 continued to dance, whirl, and run towards the surrounding crowd as the fireworks exploded, shooting sparks and bottle rockets in every direction. Highly entertaining and likely quite dangerous, we were mesmerized for an hour by the display. We returned to our hotel, ears ringing, and settled down to what we thought was going to be a peaceful night of rest. However, we awakened by bed-shaking explosions starting at 4 am, making us think Guatemala was back at war. We were told later that during the civil war the same explosives were fired at crowds during the Guatemalan civil war to break up riots. Fortunatley they are now only used as a really big firecracker. Wearily getting out of bed at 6 am, we returned to the main square to watch a choreographed dance of random costumed characters like Homer Simpson, Elvis and Che Guevara, which no one we talked to could explain. After we left Chichicastenango that morning and drove north towards Tikal, all traffic on the highway was stopped twice in small towns to make way for similar dancing parades. 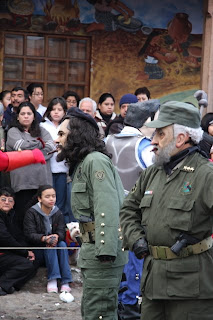 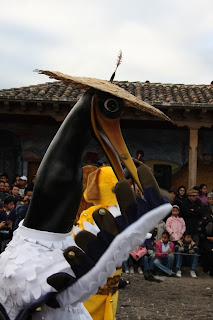 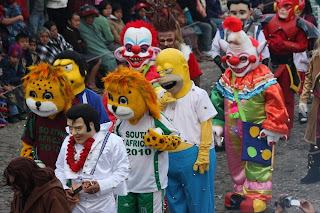 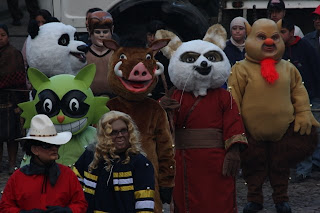 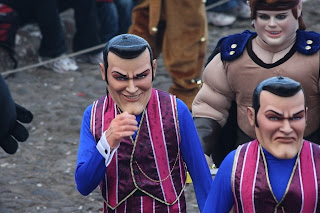