Through the ICA language school, we arranged to take three weeks of intensive Spanish language classes and stay with a local family in Xelaju. We met our new ‘family’ last Sunday night, and got to know them better over a dinner of steaming mugs of hot chocolate and sweet Guatemalan bread. Shirly and Sergio Castillo have been hosting students from ICA for several months, and they know to speak slowly and clearly so we can understand them. Their two very sweet children, Oscar and Alfonso, are 5 and 6 years old and enjoy practicing their English with us. After talking with the Castillos for several hours, our brains were overloaded with Spanish so we went to bed early. 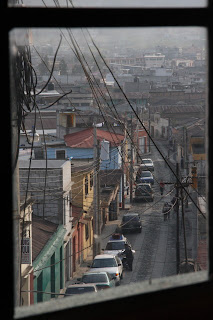 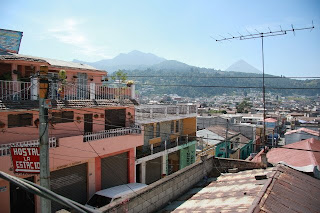 (views from our bedroom window)

ICA places its students with typical middle-class families, and it has been interesting to see the similarities and differences from life in the US. While they have cable and cell phones, the Castillo home is quite small and simply constructed around a small central courtyard. The family shares one bedroom, and spends much of its time in the adjacent living/dining room area. The bathrooms and sinks are located outside in the courtyard, and both clothes and dishes are washed in a cement sink. Our room is upstairs over our bathroom, and is a large simple room furnished only with a bed and dresser. The water and electricity is somewhat unreliable, and taking showers in the chilly morning has made for some chattering teeth. Sometimes in the middle of the night we are awakened by cats walking noisily on the tin roof, and in the mornings by a wobbly recording of music blasted from a nearby church. 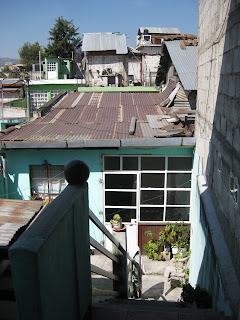 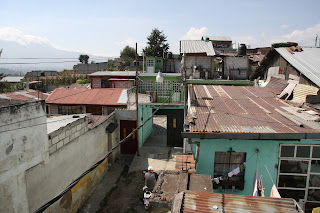 (views from our bedroom door) 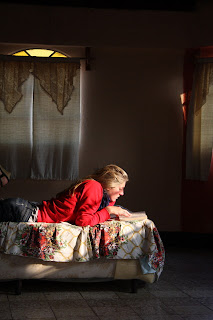 Since that first Sunday night, we fell into a nice routine, and I feel like our Spanish has improved dramatically. We share a large two-course breakfast of a milky porridge and tea, followed by eggs, tortillas, and bread with Shirly and Sergio, and then head to ICA for 5 hours of one-on-one Spanish lessons. Heads spinning from irregular verb conjugations and loads of new vocabulary, we eat a hearty lunch with the Castillos around 2 pm. Shirly is a great cook, and we really enjoy the Guatemalan foods she prepares for us. Thick corn tortillas or crusty bread is typically served with a meal of meat, beans, vegetables, and juice. Some days we especially enjoyed delicious tamales, chilaquiles, or soup as well. We have been surprised by some unusual food combinations though. One morning I was excited when Shirly set down bowls of cornflakes instead of porridge for breakfast, as I do miss some simple things from our previous life in the US. I poured milk out of the pitcher and happily started to eat, but was quite surprised by the first spoonful as the milk was hot. In Guatemala apparently all cereals are eaten this way. Another morning we were served pan-fried plantains with a pungent Guatemalan cheese, which was an unusual flavor combination to say the least. We spend most afternoons drinking liquados, tasty milk and fruit shakes, or coffee in a local café with wireless internet access, while doing homework, reviewing flashcards, and copying notes. One afternoon we slacked off and took a trip up into the verdant mountains surrounding Xelaju to relax in beautiful fog-shrouded natural hot springs. After returning home at 7 pm, we share a smaller dinner with the family, usually consisting of tea, bread and tortillas. I think watching Spanish Nickelodeon with Oscar and Alfonso has also helped our Spanish a bit. 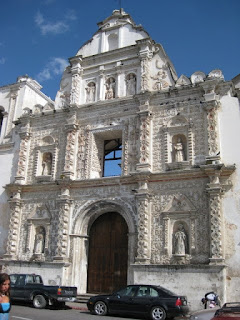 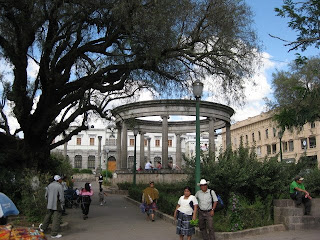 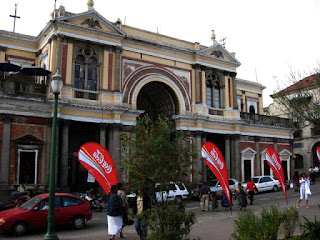 One of the things we enjoy the most about our time in Xelaju is learning more about how life in Guatemala has changed so much over the last 30 or 40 years. During the colonial period from the 1500-1800s, the Spanish enslaved Guatemala’s indigenous people to work the land. After witnessing the genocide of indigenous peoples in the Caribbean and other Latin American areas, the Catholic church approached conversion of the local Mayan people with slightly more respect and pacifism, and the Christianity practiced today in much of Guatemala is a mix of Mayan animism and ceremony with Catholicism. Society in Guatemala became quite stratified, with European born Spaniards holding most of the land and wealth; criollos, or people born in Guatemala of Spanish blood slightly below the Spanish; mestizos, or people of mixed Spanish and Mayan blood in the middle; and Maya and black slaves at the bottom. In 1821, the criollos successful revolted against Spanish colonial rule and achieved independence from Spain. This did little to improve the lives of the mestizos and actually diminished quality of life for Mayas and slaves in Guatemala. From the 1870s until 1945, a series of brutal, greedy dictators did modernize Guatemala somewhat in order to stimulate coffee production. However, this mainly served to increase the socio-economic, class, and race inequalities already in place.  Between 1945 and 1952, democracy was beginning to take hold in Guatemala.  Much of these reforms were undone as the Guatemalan government was overthrown by a CIA-orchestrated invasion from Honduras in 1954, after Guatemala attempted to expropriate vast lands that were being held fallow by the United Fruit Company. As a reaction to the violent military dictatorships that followed this coup during the 50s and 60s, left-wing guerrilla groups began to form. By 1979, Amnesty International estimated that 50,000-60,000 people had been killed during the political violence of the 1970s. The 1970s, 80s, and 90s were marked by military coups, dictators, and starting in 1982, a civil war between the ruling military junta and the URNG, a coalition of four powerful guerrilla groups. Atrocities were committed by both sides of this civil war, which ended in 1996, after an estimated 200,000 people had died, millions were homeless, and countless others had disappeared. While life in Guatemala has dramatically improved since then, human rights abuses, corrupt government officials, drugs, and poverty still plague the country. 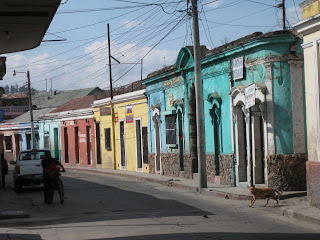 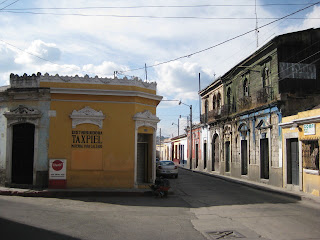 All this aside, the people here are incredibly friendly. It is considered impolite to begin a conversation or enter a store without first greeting people with ‘buen dia’ (good day), people smile as you pass them on the sidewalk, and Sergio greets us a with a hug and a handshake every time we see him. Tourists in Guatemala are generally unaffected by the problems that plague Guatemalan citizens, but we are glad to be living with a family so we can better understand their lives. Sergio and Shirly grew up during the civil war, and have shared stories about hearing gunfire around their homes, and seeing neighbors and their children pulled from their homes, never to be seen again. Despite that, Sergio smiles as he talks with pride about Guatemala, and says ‘gracias a Dios’ (thanks to God) when he discusses how his children’s lives will be so different from his childhood. 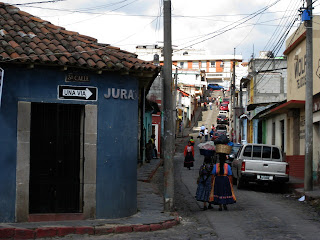 (view of our family’s street)