After spending a week in Oaxaca City and hiking the surrounding Sierra Norte Mountains, we were ready to leave cool weather behind us and head back to the warm beaches of the Pacific coast. Mexican Highway 175 took us out of the cactus strewn mountain highlands and into the green humid tropics of the Oaxacan coast. Changing into shorts and sandals in the hot afternoon sun, Kristin and I laughed about how only 24 hours earlier we sat in a rain soaked town at 10,433 feet, wondering when we would ever feel warm again. After spending a night in San Augustinillo in air conditioned comfort, we drove up the coast to the former fishing town of Puerto Escondido. After looking through our guide books, Puerto Escondido seemed to have everything we were looking for – nice beaches, surfing, and a laid back traveler’s scene. As we reached the outskirts of town, the two lane highway was in the process of being rebuilt. The thick cloud of dust kicked up by pickup trucks and taxis and the drab buildings next to the road started to lower our dreams of entering a beautiful tropical beach town. Before giving up on the 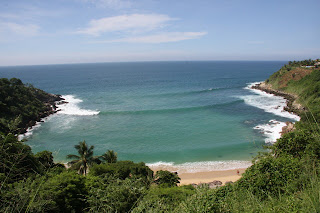 place, we decided to check out Playa Carrizalillo, one of the beaches in town. Our hopes dimmed as we parked at the end of a dingy gravel road and walked through a trash filled park. Things changed around quickly as we reached the edge of a cliff. We were looking over a beautiful palm lined emerald bay with a white sand beach. A dozen surfers lined the left side of the water, while snorkelers explored the coral reefs on the right. As we stood sweating in the blazing sun, I imagined myself laying on the beach sipping an ice cold Pacifico beer, struggling with tough decision of whether I should choose surfing or snorkeling as my next activity. Things only got better after finding a simple yet affordable room at Beach Hotel Ines, complete with a thatched roof restaurant overlooking the pool. This was a luxury we usually could not afford.

Our hotel was located on Zicatela beach, a world renowned surf spot. The next morning I wanted to check out the waves, so I walked out of the hotel and over to the beach. The road separating the beach from the hotel was in the process of being redone, and a 10 foot ditch was being dug by means of a backhoe and a half a dozen construction workers. None of the men wore helmets, and had either bare feet or flip flops for footwear.

Once on the beach, I watched surfers expertly ride waves breaking 6 feet or more over their heads. Not only did the wave have height, but extreme power. The wave would quickly rise up, curl into perfect barrels, then slam viciously into shallow water. The wave would collapse at such speed, only a few surfers could escape getting crushed. Many of the surfers would gracefully ride the face of the wave and disappear into the blue green tube, only to reappear behind the whitewater after a brutal beating. I could see why Zicatela is nicknamed “the Mexican Pipeline” due to its similarity to the huge break of that name in Hawaii. Our hotel was filled with an international group of surfers, all toting Guns. Guns are long pointed boards used specifically for surfing big waves. The book “The World Stormrider Guide” gives the following advice for the Oaxacan coast: “Bring a couple of boards, including a gun and be prepared to snap them. A helmet is a good idea”. In the course of a week, we saw three broken boards being brought back to the hotel. The LA Times ran an article where they interviewed Godofredo Vasquez, one of the beach lifeguards. “I’ve seen people paralyzed, get broken noses, eye injuries, shoulders dislocated.” Vasquez said. “These waves are very strong.” Kristin pointed out that even the boogie boarders surfing this beach are in excellent physical shape. These boogie boarders were not the common overweight kids or middle aged man on vacation you see on other beaches. These guys are riding huge waves and often finish their ride with an “El Rollo.” El Rollo is a trick were they hit the lip of the wave, and then do a roll before landing back on the water, much like an airplane does a barrel roll. 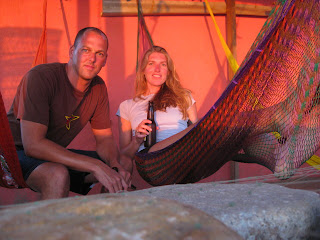 I did try to surf the break later in the week when the waves were much smaller, but the only real success I had was putting two cracks in my board. Kristin managed to stand up for the first time on a couple of waves at the much tamer Playa Carrizalillo. Since she’s now officially a surfer I think she should buy a rash guard – something she resisted earlier stating that she wasn’t deserving. Overall, we spent a very pleasant six days lying by the pool, surfing, reading, and catching up on some Spanish lessons. For some reason after six days of this we decided to leave; I think we may have been a little concerned that if we didn’t leave soon, we might spend the next 2 months here (click here for YouTube video of our experience). Our next destination is the state of Chiapas, where we will be exploring ruins in the northern jungles, and celebrating Dia de Muertos (Day of the Dead) in San Cristobal de la Casas.