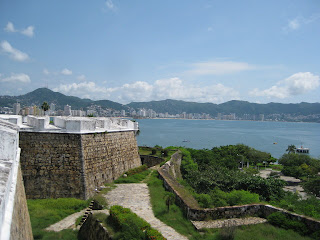 Hearing tales of crime, we followed the advice Bruce in Tracones gave us and booked an nice hotel in Acapulco. At least the price turned out not to be too painful, what we expected to cost $200 to $300 USD a night was only $70 USD. After parking our car at the Hyatt, admiring the large room and our choice of two pools, we took one of the many buses that run along La Costera, the road that hugs the long bayfront of Acapulco. After our warnings about Acapulco, we were pleasantly surprised to find a beautiful city climbing up steep green hills on a large bay.

Acapulco city buses are unlike anything we have in the US; I think if we got creative with our public transportation in this fashion, more people in the US would think about getting rid of their cars. There is literally one of these buses every 20 or 30 feet, and cost only $0.45 USD a ride. Covered with airbrushed custom artwork , each bus was uniquely named in huge mirror letters covering most of the windshield. “Dark Night” and “Garfield” were equiped with booming sound systems, whereas the only sound “Seahorse” made was ear piercing squeaks whenever the brakes were applied. These buses may not be in mint condition, but they are an effective way to travel. Your next best bet at a much higher price are the fearless Volkswagen beetle cabs darting around the city, but make sure to negotiate the fare before stepping in.

We took the “Seahorse” bus over to the market, and walked up a steep hill to watch the cliff diving show at the Quebrada. These fearless young men jump into a narrow bay surrounded by steep jagged rocks, with fairly rough surf tossing them around in the water. They then climb up a steep cliff (unaided by ropes or any protection) and dive off small platforms. 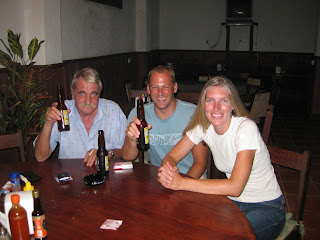 We stopped to eat after watching the cliff divers perform. Restaurante Tropicana was empty except for a lone man sitting at a table up front. We sat down next to him, and found out his name was Werner. Werner opened up the restaurant around 2 years ago, personally tiling the floors and creating the furniture. Coming over from Germany over 20 years ago, his career varied widely from metal recycling to a shady importing business. Ordering off a special menu, our excellent German meal ended up going from an one hour event to many beers (on the house) and discussion until early in the morning about everything from economics to politics. Werner’s girlfriend’s phone calls inquiring his whereabouts became more frequent as the night went on, and he finally caved in to the pressure around 1am. If you ever end up in Acapulco watching the Quebrada cliff divers, to yourself a favor and walk across the square to enjoy a great German meal.