We arrived in Durango Monday afternoon tired from three nights of sleep deprivation in Zacatacas. Dishearteningly, it was even colder and rainier in Durango, so we treated ourselves to a hotel with cable TV so we could veg out in comfort for the night. Durango had a very pretty square, fronted with a church, surrounded by stores (including the nicest McDonalds you can possibly imagine), and contained a picturesque gazebo in the middle. It seemed in general like a nice city, but we were ready at that point for some beaches and warm weather. We did have the feeling (similar to one I often had in San Francisco, in July, when I was wearing my winter coat and shivering) that we may never be hot again. We left for Mazatlan on Tuesday morning, on a road called the Espinazo del Diablo, or the Spine of the Devil. 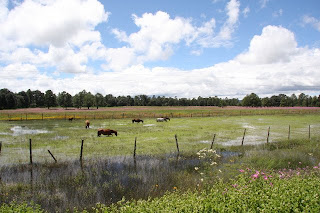 The road climbed steadily up through rolling hills and countryside decorated with beautiful wildflowers. For several hours it wound through vertical cliff walls and sheer drop offs. Luckily the direction we were traveling was on the inside of the road for almost the whole drive. The views from the roadside were spectacular with vistas of steep mountain ranges to the horizon. The environment changed dramatically from alpine to tropical when we started descending down the Western slope. Pine tree were replaced with palm trees, and the vegetation became lush and green. 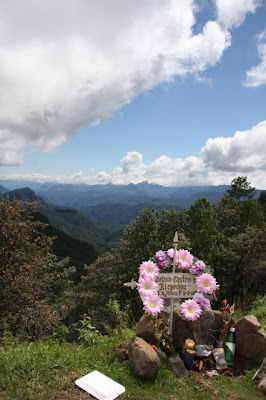 The New Hotel del Rio, a half constructed hotel, served as our home in Mazatlan for the next two nights. The bottom floor was completely finished; the lobby and upstairs rooms were being worked on. It was close to Viejo Mazatlan, the old section of town, which was quite pretty with small garden squares, old churches, artisans’ shops, and colonial style architecture. 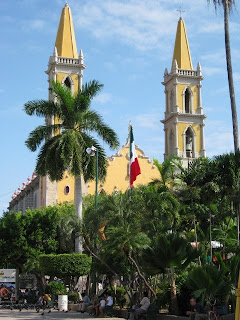 We enjoyed a nice day on the beach of Isla de la Piedro, or Stone Island after Rob, an musican who moved to Mazatlan from San Diego listed it as a place to check out . Apparently this is where they film Corona advertisements. There are many palapas, palm thatched roof restaurants, lining the beach, and warm water with gentle waves. After finding a great location with our own personal tiki hut and friendly staff to keep us from getting too thirsty, we spent the day swimming, eating, playing chess, and relaxing. 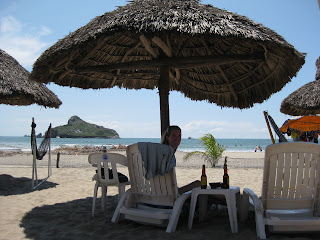 We headed back to Viejo Mazatlan that evening for a great performance at Teatro Angela Peralta, a beautiful theater built in 1860 that had recently been restored. The night started with opera, and ended with some fantastic mariachi music. The audience was singing along to what obviously were famous traditional Mexican songs.

Upon heading out of Mazatlan, we decided to take a quick detour through El Zona Dorada, the Gold Zone, where more of the tourists tend to spend their time in the city. While there were several official Senor Frogs stores and a Starbucks, we were generally unimpressed and glad that we had spent our time in Viejo Mazatlan. Our plan was to spend the next couple of days in San Blas, a smaller town on the coast known for its surfing. However, we were pretty unimpressed when we arrived. We were also fearful of the warnings in several books about the jejenes, or sand flies that feast on human flesh during sunset and sunrise. We therefore continued on to Chacala, a very small town further south down the coast. It had one main street with a couple of smaller cobblestone streets off to the side, and was almost deserted. We camped on the beach and fled early the next morning, chased away by the jejenes we tried to avoid. Chacala is described as ‘undiscovered’ in the Lonely Planet guides. After experience there and being inimpressed by San Blas we headed for the slightly more discovered small town of Sayulita. 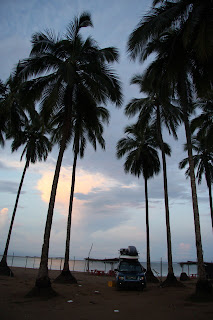