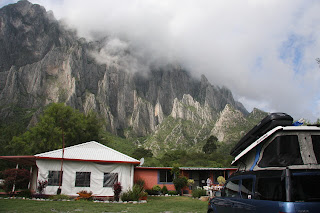 We have now been in Mexico for over a week, and have enjoyed the beautiful scenery, tasty food, and friendly people. After crossing the Mexican-US border in McAllen Texas on September 8, it took us about an hour (with the help of a friendly Mexican tourist who spoke English) to receive our tourist cards and vehicle import permit. Being unseasoned travelers, we decided to take the toll roads from Reynosa to Monterrey. These perfectly maintained cuenta roads felt like an USA freeway, except that they were almost deserted. We quickly realized why they were deserted after paying our first toll of $18. After several more tolls, we arrived in Monterrey and drove an hour northwest to Hidalgo. Potrero Chico is a park on the west side of Hidalgo, and is renowned for its rock climbing. We camped for $10 a night at Posada Potrero Chico, a central location for rock climbers. We arrived about a month before the season begins, so we had the whole place to ourselves for a couple of days, before sharing the place with Lisa, a friendly Austrian. The day we arrived we asked for a guide and equipment rental, and our hourly updates from the friendly staff were that something would be arranged manana. Lisa and I managed to get a couple of climbs in on the last day, but spent most of the time relaxing, hiking, and studying Spanish. 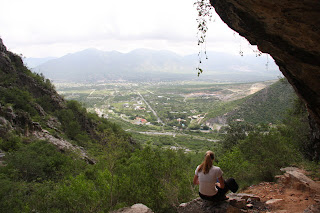 We particularly entertained by a wild chiva hunt. Four men arrived in a pickup truck one afternoon and asked Alex the manager if they could pass through their land in order to catch a wild white goat that has been roaming the hillside for the last couple of years. We watched the men through our binoculars spend an hour of grueling uphill scrambling through the brush attempting to surround the sleeping chiva blanca. When they got close, la chiva calmly awoke, and gracefully escaped up the steep hill. Alex and the staff enjoyed seeing la chiva in the hills, so they misdirected the hunters for another grueling hour in the hopes that would convince them not to re-attempt this hunt.