While we like to believe that we are going to be traveling without any plan, agenda, or itinerary, some measure of thought does need to go towards figuring out where we should be when, to avoid either the hottest (or coldest) and rainiest (or snowiest) parts of the year. The National Geographic Map Machine is by far the slickest weather mapping site I’ve found. It lets you look at average temperature, rainfall, and snow cover for both January and July (among many other things), and looks pretty while it’s doing it too. Given that we’re going to be heading out of the US at the beginning of September, from the overall weather patterns from these maps, I think we should try to drive down the Pacific side of South America, arriving at the Southern tip sometime in January or February, and head back up on the Atlantic side to the Amazon arriving there by May or June. Looks like it’s always going to be hot and rainy in Central America. We’ll do more in depth checking with our guidebooks and more local weather information, but this is at least a beginning.

This is a screen shot of the average rainfall in January: 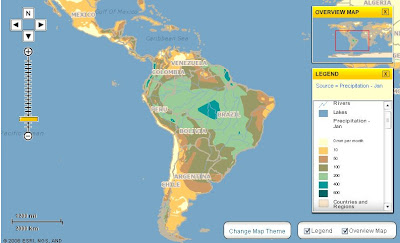